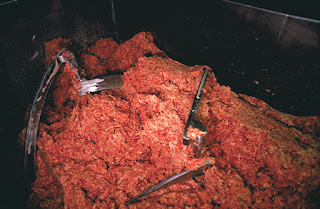 The answer: they all use controversial means to achieve a positive outcome. These are confusing combinations – people don’t know how to react.

Last year, Theaker’s Quarterly Fiction released UNSPLATTERPUNK!, an anthology that achieves the literary equivalent of these odd juxtapositions. The collection included five stories that launched the unsplatterpunk movement. Unsplatterpunk, like its splatterpunk forerunner, assaults the reader with stories soaked in gore and controversial subject matter, but it takes a slightly different path by incorporating a positive message.

Soon, TQF will release UNSPLATTERPUNK! 2, a follow-up to the anthology that one British Fantasy Society reviewer called “memorable and thought-provoking”. After reading many submissions, we’ve selected seven tales of depravity and revulsion that also deliver a moral statement:

“Convention Hitler!” by Hugh Alsin
“Gunkectomy” by Douglas J. Ogurek
“The Tapestry of Roubaix” by Howard Phillips
“The Villainy of Solitude” by Triffooper Saxelbax
“The Bones of Old England” by M.S. Swift
“First Kiss” by Drew Tapley
“The Music of Zeddy Graves” by Stephen Theaker

The collection will also include a foreword by Rafe McGregor, author of The Value of Literature.

So stay tuned for an unlikely horror convention attendee, a booger-eating helicopter parent, shocking pleasures, a murderous musician, a disgusting augmented reality game, a maniacal heir, and expulsions galore. Perhaps you will find beauty in the darkness.
Posted by Douglas J. Ogurek