Fantastic Beasts and Where to Find Them, by J.K. Rowling (Pottermore Publishing) | Review by Douglas J. Ogurek 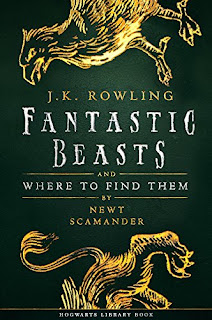 An absorbing compendium of magical creatures both familiar and new

A snake that rises from ashes, lays red-hot eggs, and then dies an hour later. A creature that likes to gorge itself on magic potions and chew on wands. A bird that only flies in the rain. These are just a few of the treats in Fantastic Beasts and Where to Find Them, J.K. Rowling’s collection of mythical creatures in the Harry Potter universe. The list, according to the book, is compiled by Newt Scamander, a Magizoologist (i.e., one who studies magical creatures) born at the close of the nineteenth century.

The volume starts with an explanation of the lengths to which wizards are willing to go to prevent Muggles (i.e., humans without magical powers) from discovering these beasts. It also describes the danger classification hierarchy and explains how some creatures (e.g., Centaurs, Merpeople) straddle the spectrum between beast and human (though most have opted for the former classification).

The remainder of the collection details the physical characteristics and behaviours of creatures and offers their Ministry of Magic (M.O.M.) classification ranging from X (“boring”) to XXXXX (“known wizard killer/impossible to train or domesticate”). Examples of the latter include the Basilisk (a snake featured in the Harry Potter series) born by having a frog sit atop a chicken egg, the Acromantula spider that has 15-foot-long legs and is capable of human speech, and the Chimaera (i.e., lion’s head, goat’s body, dragon’s tail). I believe the list’s only X-classified creature is the Flobberworm, which secretes a mucus that wizards use to thicken their potions. According to the summary, it hangs out in ditches and does not move much. Many of the creatures, particularly those in the XXX category, can be beneficial to wizards, but also pose a threat.

Fantastic Beasts includes well-known beings (e.g., Griffins, Leprechauns, Pixies, Fairies, Loch Ness Monster [referred to as the world’s largest Kelpie]) and many others that the author invented. There are creatures that will entertain humans and creatures that will harm humans (or both). Some creatures camouflage themselves as logs or stones, while one rhino-like beast can use its horn to pierce anything (including metal), then inject something that causes whatever is pierced to explode! There’s even a creature called the Puffskein (a favourite among children) that likes to eat boogers.

One section covers all Potter universe dragons from solitary to man-eating, including the most dangerous: the Hungarian Horntail (XXXXX). Elsewhere, Scamander reveals that the dodo bird, which Muggles have long thought was hunted to extinction, is actually the very much alive Diricawl that can disappear in a whirl of feathers and show up elsewhere.

The diversity of beasts is best exemplified by two creatures who exploit water. Imps find entertainment by tripping people and watching them fall in. Water Demons, which appear to be horses, jump into rivers to devour the rider, then allow the victim’s intestines to float to the surface. Pleasant.

Perhaps the most frightening subject in this collection is the Lethifold (aka the Living Shroud) (XXXXX), a creature that lives in tropical areas and resembles a black cape moving along the ground. I imagined it as a stingray. It creeps up on its victims in bed, where it attempts to smother them before devouring them. The book features the fascinating story of one survivor.

If nothing else, this compilation testifies to the creativity that Rowling drew from to develop a fantasy series so popular that it often has its own section in bookstores.—Douglas J. Ogurek ***