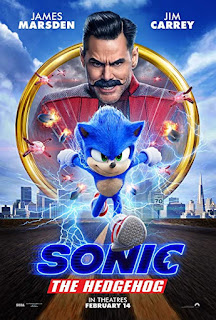 Podcasters and amateur reviewers tend to roll their eyes at Sonic the Hedgehog (2020), released just before the pandemic struck in earnest. But why? Do they want something more believable and realistic, something more emotionally resonant . . . like another Avengers film?

The film in question involves a talking, superfast blue hedgehog (Ben Schwartz) based on the 1990s video game that bears his name. And it has Jim Carrey playing an ultra-narcissistic villain to boot. Despite the naysayers, Sonic the Hedgehog, directed by Jeff Fowler, turns out to be a charming film that combines special effects with heartwarming thematic content.

Sonic spends his days zipping around a paradise-like planet where he’s being raised by a female owl. After narrowly escaping capture, he ends up on Earth, where he hides out in a cave in the fictional town of Green Hills, Montana. There he spends his days reading comics (Flash, of course), watching residents (especially “Doughnut Lord” Tom, a cop [James Marsden], and his veterinarian wife Maddie [Tika Sumpter]), and running around at more than 300 miles per hour.

When Sonic inadvertently causes a massive power outage, the US government takes note. It has no choice but to call on Dr Robotnik (Carrey), a technology genius and extreme narcissist with a “Civil War moustache,” tiny sunglasses, and five PhDs. Robotnik quickly discovers Sonic’s existence and sees the potential to bring praise on himself. “That’s one small step for man,” he says, “one giant leap for me.”

Not to worry: the owl mentor has gifted Sonic with a sack full of magical rings that allow him to teleport to a planet of giant mushrooms. Until, of course, he loses them. The so-called “Blue Devil” enlists Tom to help him retrieve a lost ring from atop a San Francisco high-rise. Thus begins a quest to get Sonic to Frisco while evading the “government whack job,” to use Tom’s words. As he hunts Sonic, Dr Robotnik employs everything from drones and obstinate multifunctional land vehicles to a flying machine.

To highlight Sonic’s speed, the filmmakers took a page from the book of X-Men films and their portrayal of Quicksilver: the motion of all other activity slows so that the viewer understands just how fast the speedy character is. When a bar fight breaks out and Sonic is about to be attacked, he says, “You’ve got to be kidding me,” then proceeds to do his thing. He appears to be moving at a normal speed while other characters are motionless.

In a more pivotal scene that highlights his speed, Sonic plays a game of baseball... by himself. He is pitcher, batter, outfielder, catcher, runner . . . everything. When the play culminates, Sonic is overtaken with a profound loneliness that transitions to a runner’s rage.

One of the key themes here is friendship. Sonic, much like a sugar-fuelled child who zips from activity to activity, vacillates between mania and abject loneliness. He is, after all, the only being of his kind in a world where he can’t show himself. No surprise, then, that one of the key things on Sonic’s “bucket list” is to get a real friend.

Meanwhile, Tom’s story quest reveals something about community values. He questions his worth as a small-town policeman and sees greener pastures in San Francisco, where he can become a more useful street cop.

Unquestionably, the best part of Sonic the Hedgehog is Jim Carrey, whose trademark over-the-top movements and dialogue delivery overshadow the one-dimensional nature of his character. What speed is to Sonic pride is to Robotnik, who humiliates others for their inferior intelligence. “I was spitting out formulas while you were spitting up formula,” he tells Tom. A favourite scene shows Robotnik dancing in his “evil lab” as he creates his flying machine.

Sometimes, Sonic’s personality grows a bit grating, but maybe that makes sense for a character who’s so full of pluck and speed. If he presented like James Bond, that would be weird... or maybe fascinating.

Not surprisingly, the story ends on a touching note. If energy drinks were a movie, this would be it. It’s a good film, with a good message.—Douglas J. Ogurek ****