Living with the Dead, Darrell Schweitzer 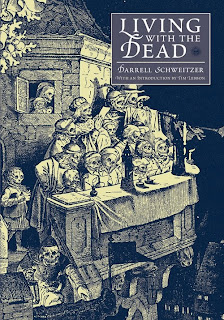 Every so often, the people living in the dingy coastal town of Old Corpsenberg get the impulse to go down to the docks, where they find piles of dead bodies left by trawlers. They pick out the bodies they like best and take them home, making them as comfortable as possible, despite the inconvenience to themselves as the bodies pile up. They are… Living with the Dead!

Since this book comes with a built-in review, and one that’s so persuasive and well-written (by Tim Lebbon), it feels a bit presumptuous to write another. I’ll give it a shot, but if you want to read a really good review of it, take a look at the introduction. It’s good when a book tells you what to think about it – saves having to think for yourself! Anyway, if you decide to read this review, you should know that you’re settling for second best!

Let’s get the quibbling out of the way first… Living with the Dead makes use of the most irritating narrative structure ever invented (in my opinion, at least): overlapping stories from different points of view. A curse on Rashomon and anyone who ever saw it! I don’t mind reading or watching a story out of order, or cut-up, or upside-down, but have a deep hatred of having to watch the same events over and over, just for the narrative to take a few short steps forward each time. I know I shouldn’t blame Rashomon; in that film the events at least appear differently to each person. More often, though, when writers use this approach (as in Living with the Dead), we see the same events, but notice different things through the new pair of eyes. This book isn’t as bad as some in that regard – the overlaps are fairly small – but there were enough of them to elicit a few here-we-go-again sighs.

I spent the early sections of the book wondering how anyone could live among so many bodies and not fall victim to disease. The answer is that the bodies don’t rot, which of course raises even more questions, but they are answered, so have a bit of faith in the book when you start reading it! (Though the ending throws things up in the air again, leaving me a bit baffled, especially since the most obvious explanation is explicitly ruled out by the back cover. Then again, should the reader take the back cover into account when trying to work out what has happened in a book? Probably not.)

The other big question I had was: who benefits from the people living like this? Usually, when people live in odd ways (or at least ways that seem odd to other people), it’s because it benefits (or at least is thought to benefit) somebody; either themselves, somebody else or society as a whole. For example, women from some cultures cover their faces in public; it’s not exactly on the scale of inviting dead bodies into your home, but it is inconvenient and seems odd to people from other cultures. We can readily conclude that someone gets something out of it, or at least that there are historical or sociological reasons why the practice developed. But who gets anything out of what these people do with the dead bodies? It’s such a horrible way to live that custom alone is not enough to explain it. The question is answered, but not to the extent that it explains the townsfolk going along with it (though there are hints that mind control is involved).

Upon reflection, I think the people of Corpsenberg have an empathy for dead bodies that we just don’t have; they respect them, and really want to care for them, when we’d want to dispose of them. They wouldn’t think of them as dead bodies; they’d think of them as dead people, as people who just happen to be dead. It’s not a huge leap away from the reverence shown in some cultures to ancestor spirits. It’s not all that hard to imagine people hanging on to dead bodies if they didn’t rot; look at how some people get their pets stuffed.

Having rattled through the book in a couple of hours, thinking mainly about the practicalities of what was going on, as noted above, I took a day or two to really appreciate it. It really came to life for me when I began to look around our living room and imagine bodies arranged along the walls… At that point I started to think of the book in terms of feelings and images, rather than plot, and my estimation of it went up considerably. Reading it for plot, you miss a lot; it’s a story of images and tableaux, as much as developments and revelations.

So, enough literalism… One way of reading the book is as a metaphor for life in a seaside town; somewhere like Blackpool. The dead are the holidaymakers and daytrippers, pouring into the town in their vast numbers, overwhelming the few actual inhabitants, who have to spend their whole lives catering to the needs of out-of-towners.

The book could possibly be given a more hostile reading, as an anti-immigration metaphor, the dead representing the immigrants and refugees brought by ships to our shores. Ultimately, though, such a reading is prevented by the affection the people have for the bodies. They don’t fight them off, or try to get them out of town – they fall in love with them, turn to them for comfort, dance with them! If the book is a metaphor for immigration, in a curious way it’s a positive one. The dead are inconvenient, but only because of their numbers. The people of Old Corpsenberg are generally enriched by their presence, just as I was enriched by reading this fine, atmospheric and unforgettable book…