The Babylonian Trilogy, by Sebastien Doubinsky 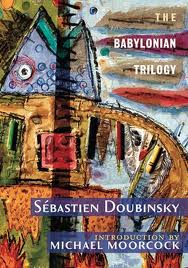 The first part of this trilogy of novellas is The Birth of Television According to Buddha. Though not overtly science-fictional, it reminded me a bit of Warren Ellis’s Transmetropolitan in tone and subject matter, and in its attempts to make sense of – or at least catalogue – a world that’s utterly confusing. I loved the short chapters, which broke what could have been quite a difficult book up into nicely manageable pieces.

It was interesting to read this on the Sony Reader (the publishers sent a review pdf), because it did show up one flaw of the device: if I wasn’t paying attention when new characters were introduced (there are lots in this first part), I couldn’t just flick my eyes back up the page to get my bearings. On the other hand, I suppose that means the Sony Reader will encourage me to read more carefully.

I took a bit of a break before reading the second part, Yellow Bull. The problem for me with this novella, about a detective assigned unenthusiastically to a serial killer case, despite how well written and engaging it was, was that I kept forgetting which book I was reading: was it Yellow Bull, or the Chabon book (I’m getting sick of hearing myself mention it) or The City in These Pages? But maybe that’s a problem with me, not the book: I’ve only read a very few crime novels before. Someone new to science fiction might see little difference between Robert Heinlein and E.E. “Doc” Smith. The similarities stick out more than the differences.

Next: the third part, The Gardens of Babylon. This was the first part with a noticeable fantastical slant, in that among other things it’s about the misadventures of a government-licensed assassin and an author guilty of illegal publication (though I suppose both have real world equivalents). After the straightforward, linear narrative of the second part, this is back to a fractured narrative from multiple viewpoints, but again it’s in easy-to-digest bite-sized chunks.

Overall, a well-written, exciting and thought-provoking book. It’s a book I suspect I won’t really understand until I read what other people have to say about it, but that wasn’t a barrier to enjoying it, and the sense that it will repay further consideration is a good thing: a book that you know you’ve probably misunderstood is much better than one that leaves you thinking, glad I’m done with that!