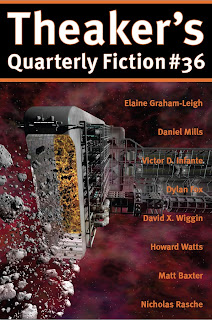 It's March 27, and that means today is Theaker’s Quarterly Fiction #36 day! We bring you 144 pages of fiction and reviews, all available for free download. It's enough to make you wish it was March 27 every day of the year!

Our fiction this time: "The Photographer’s Tale" by Daniel Mills, "A Fable of Worcester" by Victor D. Infante, "Angeline of the Woods" by Dylan Fox, "Told in a Brothel on Darien" by Elaine Graham-Leigh, "The Burden of Proof" by David X. Wiggin, "Totem" by Howard Watts, "Huracan" by Matt Baxter and "'A' Story: an Animated Adventure" by Nicholas Rasche. It's one of our strongest ever line-ups.

The space-age cover is by superstar artist Howard Watts, and Ben Ludlam illustrates the story "Huracan" in the pdf and print editions.

If it weren't for the slightly lazy editorial, I'd call this our best ever issue!

It's available in all the usual formats, all free except the print edition, which we’ve priced as cheaply as possible:


Here are the dear people who made this issue possible:

Ben Ludlam is an artist from the wastelands of County Durham. You can see more of his work at http://banthafodder.deviantart.com.

Daniel Mills is a young writer and lifelong resident of New England. His first novel, Revenants, is available from Chômu Press. (I’ve read it, and it’s quite superb—a review should appear in TQF37.)

David X. Wiggin was born during a blizzard in Georgetown Hospital. He currently occupies the position of a living cliché as a Brooklyn-dwelling writer along with his supportive wife and two insane cats. He has previously published fiction in Steampunk Magazine and Alt Hist (edited by TQF33 contributor Mark Lord).

Douglas Ogurek’s Roman Catholic faith and love of animals strongly influence his work. He lives in Gurnee, Illinois with his wife and their pets. To this issue he contributes reviews of Season of the Witch and I Am Number Four. To TQF33 he contributed the astonishing “NON”.

Dylan Fox lives in North Wales with his partner, their cats and their laptops, and works in an office doing admin. He’s had fiction appear on the Science in My Fiction blog, Bewildering Stories and a few other places. He has a blog at www.dylanfox.net where he talks about writing, memes, living with depression, gadgets, interesting facts he stumbles across and anything else about which he needs to think aloud.

Elaine Graham-Leigh is a political campaigner, historian and trainee accountant. When not bringing down the system from within, she writes speculative fiction and has had previous stories published at Jupiter SF, Bewildering Stories and The Harrow.

Howard Watts is an artist from Brighton. He has previously provided covers for Pantechnicon, Dark Horizons and TQF, and for this issue as well as supplying the cover he provides the story “Totem”.

Jacob Edwards is currently indentured to Australia’s speculative fiction flagship Andromeda Spaceways Inflight Magazine, as Jack of all Necessities (Deckchairs and Bendy Straws). To this issue he contributes reviews of the films Tron: Legacy, The Adjustment Bureau and Paul.

John Greenwood is the co-editor of Theaker’s Quarterly Fiction, and before that had been its most frequent contributor. His blog on rare and unusual books can be found at http://oxfambooksandmusicmoseley.blogspot.com.

Matt Baxter is a chef who occasionally runs an online bookshop, and he lives somewhere in the Midlands.

Nicholas Rasche is a writer and comedian based in Melbourne, Australia. His fiction has appeared in various journals, including Island, Going Down Swinging and The Famous Reporter. He recently co-wrote and appeared in “Supermanchild” (with Lisa-Skye Ioannidis), presented at the 2010 Melbourne International Comedy Festival.

Stephen Theaker is the eponymous co-editor of Theaker’s Quarterly Fiction, and writes many of its reviews. His reviews have also appeared in respectable publications like Prism and Black Static. He is very happy with this issue.

Victor D. Infante is the author of City of Insomnia, a poetry collection from Write Bloody Publishing (http://writebloody.com/), and his poems and stories have been published in numerous periodicals, including Chiron Review, Pearl, The Nervous Breakdown, Spillway, Word Riot and Dark Horizons. He founded The November 3rd Club, an online literary journal of political writing, and will shortly be launching a new online project, Radius: Poetry From the Center to the Edge. He lives and writes with his wife and pet ferret in a triple-decker apartment in Worcester, Mass., USA and has serious opinions about reality TV cooking competitions.

Next issue due June 27!
Posted by Stephen Theaker