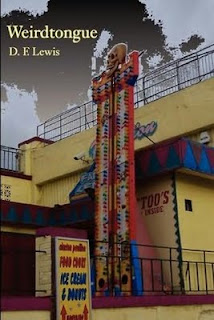 Weirdtongue is never going to be an easy read, even for the most adventurous. That in itself shouldn't imply any criticism. Watching performance art isn't the same thing as going to the cinema to watch a Hollywood blockbuster. Some books are necessarily challenging and disturbing. The question that recurs while reading Weirdtongue is whether it will be worth the effort. The novella is only 122 pages long, but reading it still requires a certain amount of endurance. To give an example, about halfway through this novella, the author's voice pops up, not for the first or last time:

"As the writer of Weirdtongue, I cannot help having a thrill of anticipation in following through the various characters as they either develop or decay, grow fat or thin, famous or infamous, tragic or comic, humble or proud. The fact that they are beyond my control, beyond the control of anyone, makes the prospect of the passions, the sadnesses, the joys, the neutralities, the crazinesses of those pink-parcels-with-motive-force (not just pink, but beige, brown, grey or black) far more possible to set me crying for real than the traditional approach to fiction characters and their fate which the writer's or reader's inevitable knowledge of artful control behind those characters causes to be so bland and unpithy, however skilfully written or read."


You might want to take a second or third pass at that second sentence (yes, there are only two sentences in that paragraph). This is an entirely typical bit of Weirdtongue's prose style. There are piles of hacked off sentence fragments and redundantly long and unwieldy paragraph-length sentences bloated with lists of synonyms and subordinate clauses clinging on for dear life. What there seems to be a shortage of is just plain sentences, ones that do not require an intense mental effort to connect their beginnings with their ends.

It's the kind of book that seems more intent on describing itself than in communicating anything about the world beyond the text, and there are frequent references to its "vexed textures of text". But just because the author is up front about this, does that excuse it? Is this "vexed text" deliberately immoderate and awkward, or is it just badly written?

Towards the end of the novella, a character called a "simplon" arrives and prepares to criticise and edit the foregoing narrative: "There is a much better way to communicate - and that's pithily. Succinctly. Simply simply." He then threatens to edit out, not only the story, but the comments he's just made. I cannot help but suspect that, while D.F. Lewis is making a knowing joke about his inability to write "pithily, succinctly, simply simply", this self-referential knowingness is a way of distracting us from the fact that much of the book is indigestible.

There's no doubt that D.F. Lewis is a very clever writer whose writing crackles with puns and obscure cultural connections. But he has allowed a preoccupation with cleverness to swell beyond all reasonable boundaries, to the exclusion of plot, character, texture and comprehensibility. Experimental fiction can be both graceful and challenging at the same time. Beckett's prose has an engaging rhythm and cadence even at its most dense and impenetrable. But compare the following sentence from Weirdtongue:

"It was still unclear if any form of the sickness was indeed just another way of saying it was a perception of it by someone was also suffering from it (or not)."


No amount of ironic talk about "vexed texts" is going to persuade me that this is anything more exotic than poor grammar combined with a lack of editing.

It's easier to discuss the style of Weirdtongue than its plot, in as much as the style is so flawed, foregrounded and picked over. The book revolves around a collection of characters who sometimes change names, become one another or lose their names altogether. Gregory Mummerset, Captain Bintiff, Padgett Weggs, Feemy Fitzworth, the Weirdmonger, G., Suzie and Chelly Mildeyes stumble around a fantastical landscape that encompasses the Glistenbury Festival, a nightmarish circus show, a Narrative Hospital, a health spa somewhere in central Europe and London during the Blitz. Their motives and relationships are as shadowy as their identities, and various events might or might not happen. None of it seems to matter very much to them, at least not as much as discussing with one another in typically vexed terms to what degree they are fictional characters or real ones.

Turn to any random page, and there will be no sense that the action has moved on from any other paragraph. A sturdy bookmark is recommended: woe betide the reader who loses their place. Emotional resonance is muted at best. I noted just one page that, in terms of insight, stood out miles from the surrounding morass: "Our faces are pressed up against the mortal shell like a child wanting to go out and play but kept indoors like the 'invalid' in The Secret Garden." I sat up at that point, but it was an isolated island poking out of the mist. Although the book is described as "Horror Tales", the only really horrifying thing about it is the sentence construction.

Influences are William Burroughs (for his repetition and non-linear plots, also his line in body-horror) and David Cronenberg, but the book itself name-checks Lovecraft, Thomas Mann and Proust (with embarrasing frequency - there is nothing remotely Proustian about it). The book is chronically self-conscious about its own fictionality, but where other post-modern writers will occasionally puncture the otherwise seamless fabric of the narrative, in order to show up the omniscient narrator of Victorian literature for a cheap sleight-of-hand, D.F. Lewis has torn his narrative to shreds to the extent that all he has left to show us are the rags that remain.

Constant interruptions, footnotes, apocrypha, reversals and retractions and similar narrative stammers mean the story never really finds any traction and the plot has been so thoroughly deconstructed that reading it is a flaccid, sterile experience. I think the big mistake here is that D.F. Lewis has allowed himself every license to play around with the conventions of the novel. I was reminded of a sketch from that old TV sketch show Absolutely: two men are staring intently at a chessboard covered with pieces from every conceivable board game, including Star Wars figures and other random elements. After a lengthy silence, one man picks up a piece, puts it back down again exactly where he found it, and declares himself the winner. In the same vein, I once knew a girl who, whenever you offered criticism of something she was a fan of (e.g. "this song's lyrics are a bit trite, no?"), would inevitably reply, "But it's meant to be like that, don't you see?" D.F. Lewis, by openly admitting his inability to write pithily, has simply declared himself the winner by his own unwritten rules. By the time I finished Weirdtongue I certainly felt like the loser of the contest. I won't be demanding a rematch.