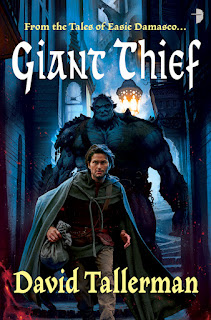 Stories by the author of Giant Thief (Angry Robot, ebook, 4314ll), David Tallerman, have appeared twice in our magazine, and twice more in my issues of Dark Horizons, so of course you must bear my potential bias in mind when reading this review. That said, on to the book. Easie Damasco is the thief of the title, who finds himself dragooned into the army of ruthless warlord Moaradred, who’s on his way to capture the crown of Castoval. Key to Moaradred’s plans are his contingent of giants, kept under his evil thumb by his possession of an object just small enough to be accidentally stolen by a thief hustling his way into the tent. Riding Saltlick, the giant to which he has been assigned, straight off the battlefield and into the hills, Easie is somewhat surprised by the persistence with which he is pursued—and subsequently, the keenness with which he and his huge new friend are courted by the resistance, particularly Estrada, female mayor of Muena Palaiya.

Easie Damasco is not a particularly nice guy. He’s a thief, of course, and he’s selfish—for example in abandoning friends to delay his own capture—and something of a sexist, as revealed by his having assumed Estrada’s appointment as mayor to be a prank of some kind. He assumes Saltlick to be an idiot and exploits him with barely a wince of conscience. Where he has to choose between himself and others, or between virtue and wealth, he’ll make the selfish, greedy choice. The book doesn’t apologise for that. One of its most admirable, likeable characters, Alvantes, brave captain of the Altapasaedan City Guard, utterly detests him, and you can see his point of view. But Easie isn’t too bad: where the chances of survival and financial gain are equal either way, he’ll choose good over evil. As the book goes on, the question is whether the good influences in his life—Estrada, Saltlick, Alvantes—will rub off on him; can he be encouraged to consider his self-interest in more than just the short term. Can this rascal be socialised by contact with upright citizens?

This novel isn’t a startling reinvention of heroic fantasy (although its portrayal of principled civil servants is somewhat novel), and the plot—mostly a long chase seen from a single character’s point of view—isn’t terribly complex, but the book is as much fun as you’d expect the story of a thief who steals a giant to be. It’s a pleasure to read, the author always at pains to give the reader a clear idea of what’s going on and where people are in relation to the action. If I say the book reminded me of an RPG scenario in that sense, I mean it as a compliment. It reminded me of one of the other fun things about playing pen and paper games: if you can do anything, you might as well do the most entertaining thing, and that’s the route this book takes. David Tallerman will almost certainly go on to write more complex, substantial novels, but I hope he gives us a few more like this first.
Posted by Stephen Theaker