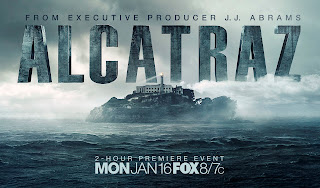 Alcatraz. JJ Abrams is a sensationalist. A sensationalist in a genre that doesn’t need him. He’s muddying the waters of good storytelling, breaking the time honoured traditions laid down centuries ago, creating a dumbed-down environment where it’s deemed acceptable to produce sub-standard, unfinished, not thought out work, masquerading as revolutionary.

Agreed, he creates circumstances that hook—which is part and parcel of our genre, any genre for that matter. However, his fictional circumstances are contrived and will never reward those foolish enough to go the distance with him.

Okay, using Lost as an example is an easy target. We were promised, or rather given hints of, great rewards for our devoted following week after week. But then we began to glance at each other as the contrivances began to pile up to the point that only a special double episode would be sufficient to tie up all the loose dangling plot strands woven into the story. I’m not going to go into detail regards this show, as many before me have written on the writers’ admittance the Lost storyline was made up on the fly. A real shame, because at some stages it all began to make sense…

Then JJ took Star Trek and shafted it, created a Spock that see-sawed between wanting to be Vulcan and human, indecision his most notable trait. He rewarded a cheating and lying Kirk—a character who should have been represented as hard working and dedicated—with the captaincy of an ugly new Enterprise, one any fanboy with a basic knowledge of design and tolerances could have bettered with a handful of Lego and plasticine.

Now we’re told JJ’s latest offering, Alcatraz, is the next best thing in genre TV. Abrams is hailed as a master of his craft. I won’t argue with that—depending on the “craft”.

The show’s premise is interesting enough. 63-odd imprisoned criminals, having vanished without explanation from Alcatraz on their day of transference from the facility are now reappearing in the present to continue their crimes. The hows, whys and WTFs mount up. Intrigued, we reach for our remotes.

We watch as a team is assembled to investigate these reappearances, and from their viewpoint we follow the scenario as it unfolds. Now, there’s the problem. It doesn’t unfold—and for my money never will. Abrams and his team of sensationalists will rely on the characters of the “team” to keep us hooked, to keep us invested in their story, rather than the core theme at hand. Sound familiar?#1.

Why the f*** would any force pluck convicts from Alcatraz and then drop them off in the present day? What is this force’s agenda? What possible motive could there be for such actions?

In the minds of the writers / creator, I’ll tell you. None. It’s the neverending story JJ champions again and again. The scenario is there simply to create an investigation team, headed by a frowning Sam Neil whose countenance undoubtedly reflects his having read the script, and our job is to join them on their journey week after week, searching for answers no member of the writing team has any intention to answer. Admittedly, some of the flashbacks intended to develop character are shot well, with a slight sepia toning—but these scenes cut with a sound cue of a prison door rattling shut simply pad the episodes.

This pilot episode plays (either purposely or not) like a cheap pastiche of the first Terminator movie, with an expressionless convict stomping around like Arnie to the deep beat of a distant drum, asking a name and then shooting his Sarah Connor equivalent. The faint light at the end of the tunnel, reading between the lines, is that perhaps person/s unknown are responsible for kidnapping these convicts, and instructing them to kill certain targets to alter the course of future history. Perhaps these person/s exist in the future to that of the show’s present day, a future they’re unhappy with, and they believe the deaths they’re bringing about will change the course of history for the better, thus putting their world back to how they want it to be. There, you see? JJ’s got me at it already—trying to figure it all out. The problem here is that just one change in the present would affect the future with incalculable results. It’s all been written about many times before, so I really hope the above is not what JJ and Co are going to finally hit us with as the reason for all this. Indeed, this Terminator comparison would be all the more obvious, had said unseen person/s simply sent back killers from their present. But that would negate the Alcatraz aspect of the (okay, I’ll type it) storyline.

We watch these convict “characters” appear in the present day. But they are not characters: they fail to question where they are, where they’ve been, why they’re here—to stare and wonder at their future, the architecture, advancements in automobile design, communications and entertainment technology, to search for relations, friends and loved ones. When captured and asked where they’ve been they simply reply, “I don’t remember.” Oh, please. Just a little development here would have served to add depth to the scenario. But no, that carrot suspended on a string from a rod held out in front of us will always be out of reach as we follow unrewarded week after week. Sound familiar? #2.

What’s the point of all this? You will never know—and that’s where JJ and co fall down. There is no plot to Alcatraz, no chance of a resolution; no choice for the viewer regards the moral high ground, the left or right, to view these possible future antago/protagonists and choose a side, to see valid points behind their actions. I’m not saying we need a blatant moustache-twirling villain to boo and hiss at every week, but sadly it’s all exterior conflict with never a hint at the interior with these cardboard convicts. There should be a splash screen before each episode rolls, “Thinking is neither required nor encouraged. For viewing purposes only.”

We need more, JJ. It’s not enough any more to dangle the bait in front of us. We want intelligent answers—or at least, development from what’s established. We want a strong tangled web that we can at least see and become entangled with, rather than one that’s just hinted at and is nothing more than a discarded cobweb swept away by indifference. We know you now, and your game’s up mate. You don’t have a full plot, you don’t know where everything’s going, or what the ultimate reveal or revelation will be, because you’re quite happy to carry on week by week until your show’s cancelled. Advertisers buy airtime from the network/channel, carrying your name before it, knowing us feeble-minded individuals will keep coming back for more, for just the chance that something might be unravelled. Sky announcers hail Alcatrash as “JJ Abram’s hit new show, Extraordinary hit prison drama, So out of the ordinary, it’s extraordinary.” While my Sky guide calls it “high concept”. You’re not proud to be a writer, but are to be a money maker. Joss Whedon you ain’t.

Alcatraz just smells and sounds of Lost, where I’m betting we’ll all be when this show is cancelled. And not too soon. Perhaps then JJ and his company of writers will finally see the error of their ways, and start afresh having climbed out of their muddy waters of deceit to join the real writers sunning themselves at the poolside. I just hope it’s a long while before one of them decides to lend him a pen.—HOWARD WATTS

Editors’ note: Alcatraz was cancelled by Fox on 10 May 2012. But that didn’t mean Howard was free to leave.

Alcatraz (second spell inside). This is all my son’s fault. He recorded the final episode of Alcatraz, telling me “They’re gonna tie it all up.” I decided to give the lad and the show the benefit of the doubt, as he’d read the first part of my review, and was convinced a conclusion of some description would be met and I would be forced to eat my words…

I’ll admit, I have missed a few episodes. Hauser’s (Sam Neil) team were after a key that combined with another two would open a door beneath Alcatraz and possibly reveal all the answers. I’m not that stupid—I knew there would probably be one of those fake brick walls—or at least the equivalent from a story point of view waiting for us. However, the final episode is pretty good—there’s a lot of backwards and forwards from 1963 to the present, drip-feeding us backstory. This works very well, is shot nicely with a good range of angles used and looks superb in HD. It seems “the warden” is back, indicating that he has been up to no good for a long time, the use of his job description rather than his name making him seem like one of Batman’s adversaries. There is even a reference to Hauser’s inner sanctum as “the Batcave”, by Solo, later on in the episode.

So when Rebecca’s grandfather chases down the guy with the key, he refuses to give it up, preferring to jump through a window (securely shut, by the way) to fall to certain death on the sidewalk below. Hauser and his team are not far behind, and a traditional car chase ensues with Rebecca at the wheel of a Mustang. Meanwhile, Sam searches the dead guy’s back pockets and pats down his flanks, looking for the all important key, stating “It’s not here.” Desoto then explains “Alcatraz inmates were always finding ways to hide things from guards.” Really? You don’t say. It’s absolutely daft that Hauser doesn’t turn the body over and search his front trouser, or shirt pockets if the key’s so important, that and the fact he’s a top ranking FBI agent and would have been trained to do so. Soto then finds the key hidden in a sock, refuses to hand it over to Hauser, even when he pulls a gun on him. The car chase continues, and for the most part is shot well, mirroring the car chase from Bullitt in a direct homage—you’ll notice the infamous green VW Beetle jump shot is cloned, as is the clipping the hedge shot. Rebecca manages to clip her grandfather’s car and it spectacularly rolls. She pulls him from the wreck and they run as it explodes.

After that, it all gets a little silly.

Now I don’t know if this final episode was written before the show was cancelled by Fox. But it seems all too obvious the time travel element would be employed if a second season was greenlit, to somehow prevent [REDACTED]’s death—I’m guessing this would have been Soto’s arc. All in all a disappointment if this final episode was written after Fox’s cancellation notice—okay, not a huge fanbase judging by the viewing figures, but a fanbase none the less that requires closure. I’ll admit, despite a few niggles regards plotting and character behaviour, I would like to have seen how the second season would have developed the story, building upon the Warden’s agenda. The last episode certainly had a good pace and was superbly edited—the nod to Bullitt helped—and it at least brought to a close the “behind the door” mystery—too little too late.

Perhaps the cancellation will convince writers to change their attitude towards their audience when developing new shows, as the ratings for Alcatraz hint that the game’s up, and that the US market will not tolerate a plot spread so thinly across a first season any more.
Posted by Stephen Theaker