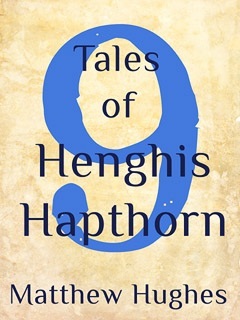 9 Tales of Henghis Hapthorn (self-published, ebook, 4412ll) collects eight adventures that were not included in the superb trilogy of novels about that character – Majestrum, The Spiral Labyrinth and Hespira, all previously and gushingly reviewed in these pages – and one story that was. He is a detective of the far future, a Sherlock of the Old Earth, whose investigations invariably lead to entertaining banter with his integrator and his outspoken intuition, and direct him to the unavoidable conclusion that the rumours are true: the underlying principle of the universe is on the cusp of changing from science to magic. How can he eliminate the impossible from his investigations when he has seen the impossible happen with his own eyes? The stories interweave with the novels, and include crucial moments in Hapthorn’s life, making them essential (and very pleasurable) reading for his fans.

Six of those tales also appear in the earlier collection, The Gist Hunter (Night Shade Books, ebook, 5336ll), along with a series of three stories about Guth Bandar (who appears as an intriguing supporting character in the novel Black Brillion), and four unrelated tales: “Shadow Man”, “The Devil You Don’t”, “Go Tell the Phoenicians” and “Bearing Up”. Bandar is a noönaut, an explorer of humanity’s collective unconscious, the Commons, where he encounters archetypal Locations, Landscapes and Situations and has to deal with the figures that populate them, known (though not to themselves) as idiomats. Part of the fun here is in identifying the myths, memories and folk tales in which (despite the chanting which is supposed to keep him out of sight and out of trouble) he becomes embroiled.

The stories in both collections are excellent, each a clever little thought experiment performed with style, humour and action. One has to recommend 9 Tales over The Gist Hunter, if only because it’s self-published and so the proceeds go directly to the author, who indicates in its introduction that any success the book achieves may lead to further Hapthorn stories. Both collections have formatting imperfections: 9 Tales lacks a built-in contents, and underline is used for emphasis instead of italics, while The Gist Hunter has a line of space between each paragraph (at least for me; these issues can sometimes be device-specific), but neither problem is likely to harm your enjoyment. It may not be a surprise that I went straight on to another of Hughes’ novels after reading these collections.
Posted by Stephen Theaker