Doctor Who: Remembrance of the Daleks by Ben Aaronovitch – reviewed by Stephen Theaker 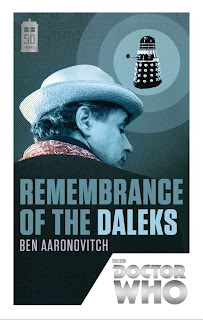 Doctor Who: Remembrance of the Daleks by Ben Aaronovitch (50th Anniversary Edition, BBC Books, ebook, 2778ll). The plot, in brief, for Whonewbies among you: the seventh Doctor, accompanied by teenage explosives enthusiast Ace, draws the Daleks to Earth – in particular to the area around Totter’s Yard and Coal Hill School, where the programme first began – to acquire the Hand of Omega, a stellar manipulator, which for mysterious reasons of his own he wants them to have. But things get rather out of control when not one but two Dalek factions turn up, both burning with hatred for the Doctor, both with special weapons at their disposal, and both desperate to get their plungers on the Hand.

I shouldn’t really be surprised that the novelisation of a television story I’ve seen a fair few times didn’t have many surprises, but you can’t explain away feelings with logic, as many a Dalek has found to their cost. That aside, this was as efficient and fast-moving as Who novelisations tend to be (it’s why they’ve always appealed to me), tidying up the storyline nicely and adding much more depth, especially to the Dalek battles that end the story – for example setting up the black Dalek’s demise by showing the damage done to his psyche by networking his mind with that of a human child. (Though that does have the side-effect of making the Doctor, who thinks he’s literally talking the Dalek to death, look a bit silly.) Some of the dialogue (almost everything Ace says) lands with the same thuds that accompanied it on television, while other lines (almost everything the Doctor says) are among the very best the series has ever produced. (“Unimaginable power, unlimited rice-pudding”!)

It was interesting to read this after enjoying the recent Counter-Measures audio series from Big Finish, which picks up the story of the soldiers and scientists who help the Doctor help the Daleks help themselves to the Hand of Omega. On that subject, despite the added detail in this book, you are still left wondering why the Doctor sees a moral difference between using the Hand himself to destroy Skaro (which would have avoided putting Earth in any danger whatsoever), and tricking the Daleks into setting it off themselves. It’s not as if the Daleks were using the Hand itself to attack anyone, so it’s hardly an appropriate come-uppance for their actions. (Their actions in this story, at least.) Maybe the Hand wouldn’t have been able to reach Skaro’s solar system without the Daleks giving it a pass through their defences, though that in turn raises the question of why the Daleks, having their first bash at solar manipulation, would use their own sun!

This fiftieth anniversary edition is pleasantly packaged, with a superbly designed cover matching the other ten reissues (they look wonderful lined up on the Kindle Fire carousel) and a new introduction from the author. I’ve been put off reading many of my older Doctor Who books by the typesetting – the policy of the old BBC range was to shrink fonts down to fit a set number of pages rather than allowing books to run long, and the Virgin New Adventures were all over the place – and so it’s great to read these reissues on Kindle. A handful of scanning errors have cropped up over the three books I’ve opened so far, but nothing to put anyone off buying them. I went straight on to the sixth Doctor’s book in the series after this (Players, by Terrance Dicks), and after that on to the fourth Doctor’s (Festival of Death, by Jonathan Morris), all in the space of a week, which shows how much I’m enjoying them.
Posted by Stephen Theaker