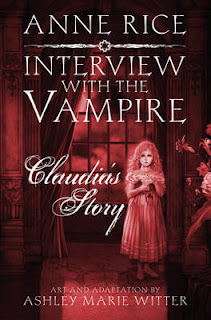 Interview with the Vampire: Claudia’s Story (Headline, hb, c.224pp) is adapted from the relevant parts of the novel by Anne Rice, and she is listed as the author, but this book seems to be essentially the work of Ashley Marie Witter. Memorably played by a creepy young Kirsten Dunst in the film adaptation, Claudia was turned as a child, and is cursed to remain a child forever, causing her much frustration and angst; she will never be a woman.

This graphic novel charts the course of her dismay; it begins with her eyes opening, ends with them closing. We see her waking from near death and being turned, her first hungry feeds, her efforts to escape with Louis from their mutual maker, Lestat, and her tragic fate in the Paris sunshine.

Well, tragic-ish – she is a serial killer! But without her desperate desire to grow up, she and Louis would have stayed away from Europe, and would not have fallen into the orbit of the more powerful, older vampires.

This story isn’t without interest, looking at the unusual familial relationships that might develop among vampires not bound by our social considerations. Lestat and Louis are all at once father and son, lovers, brothers, friends and enemies, and fathers to Claudia, the baby they had to save the relationship.

In the emotional manipulations of Lestat the book shows how a dominant vampire might exert his will over others, something often taken for granted or demonstrated through violence in such stories; he’s an abusive father, a domineering mother and a bad uncle, all in the body of a moody pop star.

As the relationship between Louis and Claudia, following their escape from Lestat, shades into a love affair between an adult and a child, it all feels uncomfortably icky. We learn eventually that they don’t have a physical relationship, but in Paris they are said to be “in love”, and there’s a fair bit of nuzzling and sweet talk. It’s a book about an abused child who is upset because a grown-up won’t abuse her some more; it’s unnecessary to explain why that didn’t appeal.

The manga-romance-style artwork plays into that theme, but is generally quite good, even if there’s not a lot to distinguish one pretty boy vampire from another. However, the colouring, a few shades of greeny-beige with splashes of red when required, makes the book look rather samey and unappetising, while the text, typeset in an unsympathetic font rather than properly lettered, and all in italicised sentence case, makes the dialogue and captions a trial to read. Recommended only for fans.
Posted by Stephen Theaker