Doctor Who: Engines of War by George Mann | review by Stephen Theaker 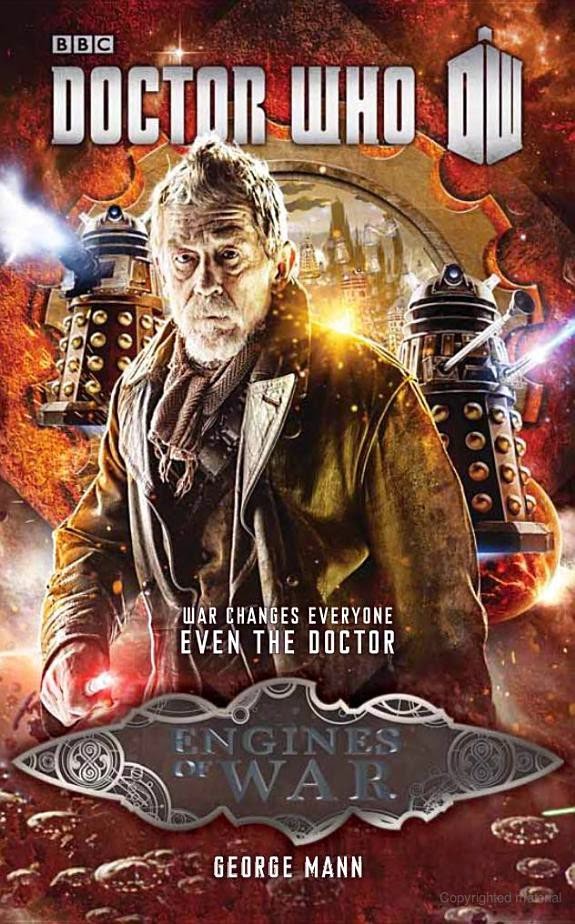 For a long time people assumed that the eighth Doctor (played on television by Paul McGann) had fought in the Time War, that the Doctor we saw in “Rose” was freshly regenerated. However, the notes in the last of the four eighth Doctor collections from Doctor Who Magazine popped a hole in that idea, making it clear that (in Russell T Davies’ head at least) it was the Doctor after McGann who had fought. Davies had been willing to let the magazine handle the regeneration, and have them send the ninth Doctor on his way, ready to fight the Time War.

On-screen events didn’t work out too differently. The eighth Doctor did his best to stay out of the war, before regenerating into a Doctor who would fight. If Christopher Eccleston had signed up for “The Day of the Doctor”, presumably that would have been him. He’d have got hold of the Moment, and stepped into the Tardis at the end, about to forget that he didn’t use it. As it was, we got the War Doctor instead, as played by John Hurt, who came between eight and nine and lived long enough to age from a young man to an elderly one.

Doctor Who: Engines of War by George Mann comes from the latter stages of his battle with the Daleks. This is what everyone wanted: the Time War! As it turns out, though we’re told that it has consumed him, the Doctor’s way of going about things during the Time War isn’t all that different to how he went about things at other times. There are still no weapons on the Tardis, though he uses it as a battering ram. He kills Daleks, but then so do most of the other Doctors at one time or another. He is still the conscience of the Time Lords, still risking everything to do the right thing.

This particular adventure stems from the plans of the Time Lords, led by Rassilon, to destroy the Tantalus Eye, an area of “temporal murmurations” surrounded by conquered human colonies. It’s where the Daleks are building a weapon that will wipe Gallifrey off the spatio-temporal map forever. So the Doctor has to stop the Daleks, he has to stop the Time Lords, and he has to do it all while keeping an eye on Cinder, a resistance fighter from the world of Moldox who joins him in the Tardis.

No book could ever live up to the Time War that lives in every fan’s imagination, but this comes pretty close, with space/time battles between military Tardises and armadas of Dalek stealth ships, Dalek progenitors being seeded through the dark corners of history, and the Doctor having to admit he once had the chance to wipe the Daleks out and didn’t do it. Strands from the programme’s history are woven together, nicely intertwining the original and current runs of the show.

The serious tone is similar to Target adaptations like Doctor Who and the Day of the Daleks and Doctor Who and the Planet of the Daleks – the War Doctor is not too different from the third Doctor on a bad day. I often found myself wondering why he hadn’t asked Ace to join him in battle, given her excellent Dalek-fighting skills, but it’s made clear that this Doctor doesn’t want companions, doesn’t want to put them at risk, even if he misses having them along. He’s still the same guy, really. Bit of a grump, heart of gold.

Russell Davies and Steven Moffat have both been generous in leaving spaces between their stories for new adventures to take place. The War Doctor is the best example yet – like the eighth Doctor, his life is wide open, and there are surely more adventures to come, more battles for him to fight. John Hurt’s casting is a gift to anyone writing novels in this space – though he only appeared in two episodes, we know the actor well enough to imagine him saying the dialogue and striding over ruined Moldox. This novel harnesses that to a satisfying Dalek war story, which I would recommend to any fan.

My only criticism is that the Doctor felt too much like the Doctor, making you wonder why he gave up the name. I’m not sure any of the other Doctors would have acted all that differently in the course of these events, and some of them would have been surprised at his restraint. They may have forgotten what happened with the Moment, but if they remember adventures like this they would know that the War Doctor wasn’t a bad sort at all. ****
Posted by Stephen Theaker