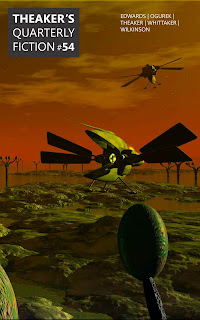 Theaker’s Quarterly Fiction #54 is here. It features a new short story by Charles Wilkinson, “Septs”, and an entire novella – complete in this issue! – by Patrick Whittaker, former winner of the BFS Short Story Competition. “The Policeman and the Silence” concerns a murder investigation in the weird town of Kaza-Blanka. I think you’ll love both stories. The issue also includes a tremendously exciting editorial where I (a) apologise for this issue being late, (b) talk about a publisher who doesn’t pay their reviewers slamming people who don’t pay other types of writer, and (c) look back at my reading in 2015. The issue also includes thirty-one reviews, by Douglas J. Ogurek, Jacob Edwards and me.

The amazing wraparound cover art is, as ever, by the marvellous Howard Watts.

Jacob Edwards also writes 42-word reviews for Derelict Space Sheep. This writer, poet and recovering lexiphanicist’s website is at http://www.jacobedwards.id.au. He has a Facebook page at http://www.facebook.com/JacobEdwardsWriter, where he posts poems and the occasional oddity.

Patrick Whittaker has made the occasional foray into short film making and has two feature film scripts in pre-production. Two of his shorts – The Raven and Raspberry Ripple – have won awards. He has an honours degree in Media Production. In 2009, he won the British Fantasy Society Short Story Competition with “Dead Astronauts”, a tale of odd goings-on in English suburbia. His dystopian novel, Sybernika, is published by Philistine Press: http://www.philistinepress.com.

Stephen Theaker’s reviews have appeared in Interzone, Black Static, Prism and the BFS Journal, as well as clogging up our pages. He shares his home with three slightly smaller Theakers, runs the British Fantasy Awards, and works in legal, medical and political publishing.