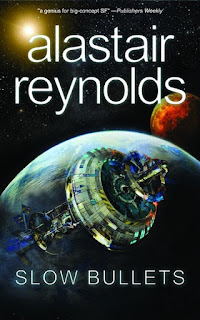 There was a war between the Central Worlds and the Peripheral Systems, both of them fairly religious, and just as a peace was agreed Scurelya Timsuk Shunde, our narrator, is captured by a war criminal and taken to a bunker, where he injects her with a slow bullet, which’ll burrow through her body till it reaches her heart. She’s left to die, and probably will, and then she wakes up…

Now, I was glad to be able to read the book and be surprised by everything that came next, and if you want the full effect too then skip to the star rating and buy the book. If not…

She wakes up on a damaged skipship, with a tiny crew, which had been transporting soldiers from both sides of the war. They seem to have arrived, but the world below is unfamiliar, the waking passengers are beginning to riot, and Scurelya thinks she sees her torturer among them. What’s more, there is now an unfamiliar ship docked at the airlock. This is a very good novella, each step Scur takes teaching us something new, about her, the ship, the universe she lives in. Perhaps those revelations won’t all come as a surprise to existing fans of Alastair Reynolds’ work, but it hits the new reader all at once. The tension and mystery and thoughtfulness reminded me of Journey into Space, where Jet Morgan and his team would so often find themselves exploring an unfamiliar, curious spaceship with a dangerous occupant. The situation has no obvious answers, so the reader is led to think things through with Scur and the allies she begins to gather, and to see how culture can be borne out of necessity. Stephen Theaker ****
Posted by Stephen Theaker