Theaker's Quarterly Fiction #57: now out, in print and ebook! 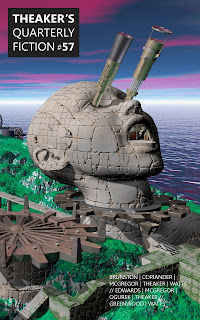 Issue fifty-seven of Theaker’s Quarterly Fiction is now out!

It is one hundred and sixty-eight pages long, and features five tales of fantasy, horror and science fiction: “The Elder Secret’s Lair” by Rafe McGregor, “Nold” by Stephen Theaker, “On Loan” by Howard Watts, “The Battle Word” by Antonella Coriander, and “With Echoing Feet He Threaded” by Walt Brunston. The spectacular wraparound cover is by Howard Watts, and the editorial includes exciting news about the magazine’s plans for 2017. The issue also includes forty pages of reviews, and some sneaky interior art from John Greenwood.

Antonella Coriander is not so sure about this. “The Battle Word” is the eighth episode of her ongoing Oulippean serial, Les aventures fantastiques de Beatrice et Veronique.

Howard Watts is a writer, artist and composer living in Seaford who provides both a story and the amazing wraparound cover art for this issue. His artwork can be seen in its native resolution on his deviantart page: http://hswatts.deviantart.com. His novel The Master of Clouds is now available on Kindle.

Jacob Edwards also writes 42-word reviews for Derelict Space Sheep. This writer, poet and recovering lexiphanicist’s website is at http://www.jacobedwards.id.au. He has a Facebook page at http://www.facebook.com/JacobEdwardsWriter, where he posts poems and the occasional oddity, and he can be found on Twitter too: https://twitter.com/ToastyVogon.

Rafe McGregor is the author of The Value of Literature, The Architect of Murder, five collections of short fiction, and over one hundred magazine articles, journal papers, and review essays. He lectures at the University of York and can be found online at https://twitter.com/rafemcgregor.

Stephen Theaker’s reviews, interviews and articles have appeared in Interzone, Black Static, Prism and the BFS Journal, as well as clogging up our pages. He shares his home with three slightly smaller Theakers, no longer runs the British Fantasy Awards, and works in legal and medical publishing.