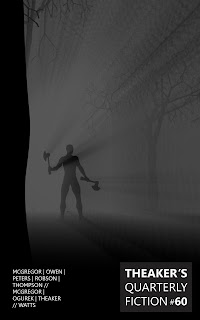 Theaker’s Quarterly Fiction #60 is now available! It contains five stories: “The Lost Testament” by Rafe McGregor, “Turning Point” by Nicki Robson, “Yttrium, Part One” by Douglas Thompson, “Amongst the Urlap” by Andrew Peters, and “Doggerland” by Jule Owen. The wraparound cover is by Howard Watts, and the editorial answers the most urgent queries in Richard Herring’s Emergency Questions. The issue also includes almost forty pages of reviews by Douglas J. Ogurek, Rafe McGregor and Stephen Theaker.

They review books by Martha Wells, Lisa Tuttle, Mira Grant, Gwyneth Jones, Jim Butcher, Skottie Young and Michael Turner, plus the films Alien: Covenant, Guardians of the Galaxy, Vol. 2, It Comes at Night, The Mummy, Pirates of the Caribbean: Dead Men Tell No Tales, Prometheus, and Wonder Woman, the album Humanz by Gorillaz, the tv shows Iron Fist and Legion, and a pair of events: Eastercon 2017: Innominate (or at least two days of it), and Into the Unknown, the exhibition at the Barbican.


Here are the kind and beautiful contributors to this issue:

Andrew Peters is an Egypt-based financial writer, who has recently started to publish fiction. His short story “In Dogpoo Park” was chosen as Editor’s Pick in the Aestas 2016 Short Story Competition run by Fabula Press, and was published in an anthology this year. Some of his flash fiction will also be appearing in the 2017 Fish Anthology, having been chosen in competition.

Douglas Thompson won the Herald/Grolsch Question of Style Award in 1989, 2nd prize in the Neil Gunn Writing Competition in 2007, and the Faith/Unbelief Poetry Prize in 2016. His short stories and poems have appeared in a wide range of magazines and anthologies, including Ambit, New Writing Scotland and Albedo One. His first book, Ultrameta, published by Eibonvale Press in August 2009, was followed by eight subsequent novels and short story collections: Sylvow (Eibonvale Press, 2010), Apoidea (The Exaggerated Press, 2011), Mechagnosis (Dog Horn Publishing, 2012), Entanglement (Elsewhen Press, 2012), The Rhymer (Elsewhen Press, 2014), The Brahan Seer (Acair Books, 2014), Volwys (Dog Horn Publishing, 2014), and The Sleep Corporation (The Exaggerated Press, 2015). A new combined collection of short stories and poems The Fallen West will be published by Snuggly Books in late 2017/early 2018. His first poetry collection Eternity’s Windfall will be published by Red Squirrel in early 2018. A retrospective collection of his earlier poetry, Soured Utopias, will be published by Dog Horn in late 2018. “Yttrium: Part One” is taken from his novel Barking Circus, forthcoming in 2018 from Eibonvale. Part Two of “Yttrium” will be published in TQF61.

Howard Watts is a writer, artist and composer living in Seaford. He provides the wraparound cover art for this issue, his thirtieth consecutive cover for us in the span of eight years. His artwork can be seen in its native resolution on his DeviantArt page: http://hswatts.deviantart.com. His novel The Master of Clouds is available on Kindle.

Jule Owen was born and raised in Merseyside and now lives in London. By day she is a practising digital technologist, working on products that involve machine learning and automation, by night she writes stories about future and other worlds

Nicki Robson writes fantasy and horror fiction. She has had short stories placed in competitions run by the British Fantasy Society and others published in anthologies from Twilight Tales in the US. She is based in Yorkshire and is currently working on a YA fantasy novel.

Rafe McGregor is the author of The Value of Literature, The Architect of Murder, five collections of short fiction, and over one hundred magazine articles, journal papers, and review essays. He lectures at the University of York and can be found online at @rafemcgregor.

Stephen Theaker is the co-editor of Theaker’s Quarterly Fiction. He apologises for this issue being three months late, but expects the next one to be along quite soon.


Back issues of Theaker’s Quarterly Fiction are usually available for free download. However, Dropbox have just turned off their public folders function (they did warn me!), so unfortunately the download links for free epub, mobi and pdf copies of the back issues won't work till I rebuild them.
Posted by Stephen Theaker