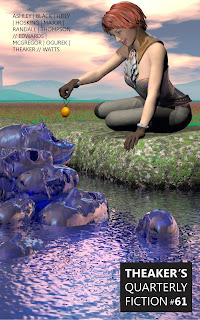 Sorry it’s so much later than planned. But we always get there in the end! We're ten issues ahead of my heroes at McSweeney's now, you know, and we gave them a ten-issue head start…


Here are the splendid and soulful contributors to this issue:

A. Katherine Black is an audiologist on some days and a writer on others. Her fiction has appeared in Farther Stars Than These, Seven by Twenty, Abstract Jam and others, and is forthcoming in Flash Fiction Magazine. She lives in Maryland with her family, their cats and her coffee machine. Website: www.flywithpigs.com.

Allen Ashley works as a creative writing tutor with six groups running across north London, including the advanced science fiction and fantasy group Clockhouse London Writers. He is the judge for the annual British Fantasy Society Short Story Competition and is currently working on an editing project on behalf of the BFS.

Douglas J. Ogurek’s work has appeared in the BFS Journal, The Literary Review, Morpheus Tales, Gone Lawn, and several anthologies. Douglas’s website can be found at www.douglasjogurek.weebly.com and his Twitter account is at www.twitter.com/unsplatter
.
Douglas Thompson won the Herald/Grolsch Question of Style Award in 1989, second prize in the Neil Gunn Writing Competition in 2007, and the Faith/Unbelief Poetry Prize in 2016. His short stories and poems have appeared in a wide range of magazines and anthologies, including Ambit, New Writing Scotland and Albedo One. His first book, Ultrameta, published by Eibonvale Press in August 2009, was followed by eight subsequent novels and short story collections: Sylvow (Eibonvale Press, 2010), Apoidea (The Exaggerated Press, 2011), Mechagnosis (Dog Horn Publishing, 2012), Entanglement (Elsewhen Press, 2012), The Rhymer (Elsewhen Press, 2014), The Brahan Seer (Acair Books, 2014), Volwys (Dog Horn Publishing, 2014), and The Sleep Corporation (The Exaggerated Press, 2015). A new combined collection of short stories and poems The Fallen West will be published by Snuggly Books in early 2018. His first poetry collection Eternity’s Windfall will be published by Red Squirrel in early 2018. A retrospective collection of his earlier poetry, Soured Utopias, will be published by Dog Horn in late 2018. “Yttrium: Part 2” is taken from his novel Barking Circus, forthcoming in 2018 from Eibonvale. “Yttrium: Part 1” appeared in TQF60.

Jessy Randall’s stories, poems, and other things have appeared in Asimov’s, Lady Churchill’s Rosebud Wristlet, McSweeney’s and Theaker’s (most recently in April 2017). She is a librarian at Colorado College and her website is bit.ly/JessyRandall. “Frakking Toasters” was originally written for the wonderful and now-defunct Verbatim: The Language Quarterly.

Libby Heily’s short stories have been published in The Write Room, Mixer Publishing, Bookends Review, The Dirty Pool, Kaaterskill Basin Literary Journal and Twisted Sister Literary Magazine. Her plays have received multiple staged readings around the country and have been produced at Longwood University, Davis and Elkins College, Sonorous Road Theater and by the Cary Playwrights Forum. Her Young Adult novel, Welcome to Sortilege Falls, was published in 2016 by Fire and Ice YA Publishing. The sequel, Wrong Side of the Rift, was published in November 2017.

Rafe McGregor is the author of The Value of Literature, The Architect of Murder, five collections of short fiction, and over one hundred articles and essays. He lectures at the University of York and can be found online at www.twitter.com/rafemcgregor.

S.J. Hosking enjoys a wide variety of literary genres, and historical fiction, horror, fantasy, science fiction, and gothic are amongst his favourites. His literary influences include, but are not limited to, Neil Gaiman, Terry Pratchett, Robert Harris, C.J. Sansom, and Stephen King. S.J. has had one story published so far, “The Princess and the Tower”, in Aphotic Realm magazine (Apparitions, June/July 2017). Aside from short stories, S.J. also writes poetry and flash fiction, and has had a sestina published online. He is currently working on his first novel. When not writing, S.J. enjoys running, walking, swimming and tennis.

Tim Major is a freelance editor and co-editor of the British Fantasy Society’s fiction journal, BFS Horizons. His first novel, You Don’t Belong Here, was published by Snowbooks. He has also released two novellas: Blighters (Abaddon) and Carus & Mitch (Omnium Gatherum). In 2018 ChiZine will publish his first YA novel, Luna Press will publish his first short story collection and Electric Dreamhouse Press will publish his non-fiction book about the silent crime film, Les Vampires. Tim’s short stories have appeared in Interzone, Not One of Us and numerous anthologies. Find out more at www.cosycatastrophes.wordpress.com.