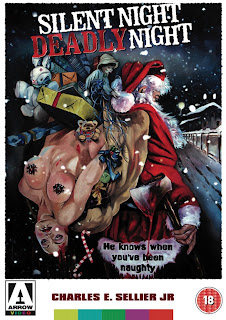 A 1984 film released on DVD just in time for Christmas (back in 2009), this anticipates the recent Halloween remake in showing just why Billy’s so bad. Taken to see Grandad at the asylum, Billy learns about Santa’s predilection for punishment, and on the way home Mum and dad are murdered at the roadside by a villain in a Santa suit. Growing up in St Mary’s orphanage, Billy learns the most important lessons of all for a would-be Vorhees: sex is naughty and punishment is necessary. Punishment is good!

Ten years later, a grown-up Billy gets a job in a toyshop, and we get a lovely (i.e. hilarious) montage of his brief happiness from spring to autumn. But Christmas comes around, as it always does, and Billy’s asked to fill in as Santa (a fireaxe is ominously in shot the first time he puts on the costume). On Christmas Eve he has a little drink at the store party, and when he walks in on an attempted rape it all floods back: it’s time for Santa to hand out punishments.

The early part of the film is quite disturbing, exploring how certain trends of religious thinking can mirror and reinforce psychosis, and they really put that poor kid through the grinder. The second half is much less effective, and disappointingly fails to follow through on the theme. Billy seems to regard everyone as naughty (apart from one little girl who receives a highly inappropriate gift), and kills indiscriminately.

A remake would have no trouble sharpening the film to its premise: during the aforementioned montage, he could have been noting various small indiscretions, making a list and checking it twice. More puns and more Christmassy murder methods wouldn’t have gone amiss: it’s hardly worth dressing up as Santa if you’re just going to kill people with an axe! Why impale someone on a moose head when there’s a Christmas tree nearby? Perhaps that gave the series somewhere to grow in the four sequels that followed.

This is nothing special, but the supporting cast attack their roles with gusto, and there are worse ways to spend 80 minutes. If you enjoyed Black Christmas, Halloween and all the other calendar murder movies you’ll probably enjoy this.