The Damned Busters, by Matthew Hughes – reviewed by Stephen Theaker 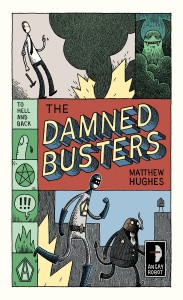 The universe of The Damned Busters (I haven’t quite figured out that title, to be honest) is one familiar from the quirkier sf of the fifties, one where there is an order to the cosmos, but it’s an order that reflects the muddled way things are done here on Earth. There’s a heaven and a hell, but both sides talk and act rather like lawyers, and the crafty hero can always find a loophole. It's a crazy universe, but one with rules that can be learnt, mastered and circumvented. And so, a fifth of the way in, having been caught in the crux of an infernal union dispute, introverted Chesney Arnstruther wangles himself a career as buffed-up superhero The Actionary (the name a clever play on the mild-mannered alter-ego’s work as an actuary), and gains Xaphan, a weasel-headed sidekick with a Jimmy Cagney patter and powers that are near-infinite – so long as Chesney’s requests stay within the terms of the deal that he’s made.

This remarkable transformation came as quite a surprise (reviewing from an epub ARC, I hadn’t spent much time looking at the (excellent) cover – and if the superhero angle wasn’t shown on the front cover I would have avoided mentioning it here as a spoiler), but it came at just the right time, that is to say, just when I was about ready, in my impatient way, to give up on the book. Though I’d quite enjoyed the early chapters – they had some interesting thoughts on the potential consequences of hell’s minions going on strike, for example – a few hundred pages more of the same would have been too much for me. When Chesney becomes a superhero the novel doesn’t move past the contractual wrangling that dragged a little in those early pages, but it all becomes much more fun. The idea of a superhero whose powers have contractual limits is, I think, a fairly novel one, and the book explores it well, with a good deal of charm; imagine a Robert Sheckley take on decompressed superheroics.

Further volumes are planned; it doesn’t feel like a novel that requires a sequel, but the battle is after all never-ending. Though a thread marks the trail to the next book, the reader with no plans to read on will not be unsatisfied by the conclusion. Or at least not for that reason; the drama of the climactic game of poker was pretty much lost on me, since I had no idea whether the players should be glad of the cards they received or not. (And why didn’t either party, once they were ahead, just fold all remaining hands?)

I didn’t adore The Damned Busters the way I did this author’s Quartet & Triptych – the books couldn’t have been more different – but by the end it had won me over, and I’ll remember it fondly.