Borderlands: Game of the Year Edition – reviewed by Stephen Theaker 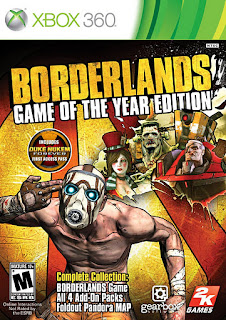 Originally released in 2009 to good but not stellar reviews, Borderlands has been the very definition of a slow-burning hit, going on to sell over three million copies. This two-disc edition, containing the original game plus four add-on packs, seems set to keep sales simmering. It opens with the player in a run-down bus, being dropped off on the East Coast of Pandora, a rusting, abandoned junkyard world of lunatics, treasure hunters and savage alien wildlife. In theory you’re there to find the Vault, a fabled source of treasure, power and sex appeal, but you quickly get sidelined, in true RPG style, into a series of smaller quests, such as retrieving T.K. Baha’s stolen food from the dog-like Skags, collecting incriminating recordings made by insane scientist Tannis and her unfaithful Echo device, and fighting your way through hordes of bandits to remove obscene graffiti about Mad Moxxi.

But though the structure of quest givers, waypoints, experience points and loot is that of an RPG, Borderlands plays as a first-person shooter. You don’t get to chat with NPCs, and if you see a human moving around it’s time to draw your guns. And what a lot of guns there are! Randomly generated in endless, fascinating variety, there’s always a new type to try: caustic weapons that melt your enemies, rocket launchers that bury them in fire, sniper rifles that can turn a distant bandit’s leg into Skag food. And each of the four playable characters has their own special, upgradable attacks – a vicious bird, pounding fists, a machine gun turret and phase walking – meaning that there’s always a novelty to the fighting, especially when teaming up with others in multiplayer, whether online or in the superbly fun split screen mode. A small selection of vehicles handles well but is sensibly excluded from many quest areas.

The main mission done – or even sooner for impatient players – the add-on packs call. Being returned to the start-point of each add-on when reloading is frustrating, and encourages longer – sometimes too long – play sessions. But Mad Moxxi’s Underdome Riot is the only disappointment, a horde mode in which players gain no experience for kills and enemies drop few weapons. Gaining the least of its achievements involves surviving 60 tedious waves of enemies (and an awful lot of hiding while health recharges). A good shotgun is recommended for The Zombie Island of Doctor Ned, in which a tannoy warns survivors not to engage in “oral contact” with the undead. After hearing his increasingly forlorn missives to high command one can’t help sympathising with the title character of The Secret Armory of General Knoxx, despite his determination to kill you. And as well as your little robot friends, Claptrap’s Robot Revolution sets you against Brainiac versions of all enemies to date, who whimper sadly when shot.

Borderlands isn’t a game with a fantastic plot, and it can be a bit repetitive – enemies and environments are endlessly recycled – but it’s funny and well-balanced. Enemies level up and respawn, meaning there’s always a reason to have another go. This game of the year edition is a substantial package at an excellent price, and is highly recommended.