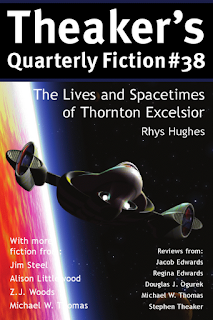 Wow! I love the artwork for this issue of TQF! Once again it's by Howard Watts, although fans of Rhys Hughes won't be surprised to learn that it doesn't actually reflect the contents of “The Lives and Spacetimes of Thornton Excelsior”! That's because I decided on the artwork before I had the story!

The issue features four other magnificent stories. “The Daylight Witch” is by Jim Steel, one of my very favourite contributors to Dark Horizons, each of his stories being completely unique.

Alison Littlewood, another Dark Horizons regular, is off to the major leagues now, having sold a novel to Jo Fletcher Books! “Off and On Again” is an odd one, in that it was previously used by dodgy geezer David Boyer without her permission, so she was keen to see it published somewhere respectable. She settled for us!

“Better than Llandudno, eh?” is an extract from Michael W. Thomas's forthcoming novel, Pilgrims of the White Horizon, a sequel to The Mercury Annual. We'll be publishing it!

“Old Preach’s Gods” is by Z.J. Woods, the one writer in this issue who is new to me, but I hope this won't be the last time his work appears in our pages.

On the editorial front, after the controversy of last issue we're back on frothy territory with “Taking a Break with TQF!”, where I discuss the profound effect that taking a break from posting on Facebook has had on my life. (I've read a lot more comics, basically.)

This 108pp issue is available in all the usual formats, all free except the print edition, which we’ve priced as cheaply as possible:

Alison Littlewood lives in West Yorkshire, England, where she hoards books, dreams dreams and writes fiction – mainly in the dark fantasy and horror genres. Alison has contributed to Black Static, Dark Horizons, Not One Of Us and the charity anthology Never Again. Her debut novel, A Cold Season, will be out early in 2012 from Jo Fletcher Books, an imprint of Quercus. Visit her at www.alisonlittlewood.co.uk.

Douglas J. Ogurek’s work appears in or is forthcoming in the BFS Journal, The Literary Review, Theaker’s Quarterly Fiction, and Dark Things V (Pill Hill Press). Ogurek has also written over 50 articles about architectural planning and design. To this issue he contributes reviews of Cowboys & Aliens and Harry Potter and the Deathly Hallows, Part 2. He contributed “NON” to TQF33. He lives in Gurnee, Illinois with his wife and their six pets.

Howard Watts is an artist from Brighton who provides the marvellous cover to this issue. He has previously provided covers for Pantechnicon, Dark Horizons and TQF. His story “Totem” appeared in TQF36.

Jacob Edwards is currently indentured to Australia’s speculative fiction flagship Andromeda Spaceways Inflight Magazine, as Jack of all Necessities (Deckchairs and Bendy Straws). To this issue he contributes a review of Rise of the Planet of the Apes.

Jim Steel grew up in the countryside where, apparently, a witch had lived at one of the neighbouring farms in the sixteenth century. To get to her house you had to cross the railway where a previous occupant had committed suicide, go past the ruined church with its crypt and gravestones, skirt around the pool where yet another occupant had drowned himself, and then go through the woods where a madman had murdered a small child. So he wasn’t really worried about the witch when he was a young boy. No; Jim was much more worried about her lover who had lived in the ruined castle next to his own house. He had been a warlock.

Michael Wyndham Thomas’s work is regularly published in the UK, the US and Europe. His latest poetry collection, Port Winston Mulberry, is published by Littlejohn and Bray; a new collection is forthcoming in 2012. His most recent novel is The Mercury Annual, published in Theaker’s Paperback Library (2009). The sequel, Pilgrims at the White Horizon, is also forthcoming. Michael also reviews for TQF, The American Journal of Haiku, Other Poetry and Under the Radar. He is poet-in-residence at the annual Robert Frost Festival in Key West, Florida. His website can be found at: www.michaelwthomas.co.uk.

Regina Edwards wandered into a bookstore, during a brief stint in London, thinking idly how serendipitous it would be if she were to run into Glen Duncan signing his latest book, I Lucifer. As it happened, he was there… up until five minutes before she arrived. When not lamenting fate’s bungled intervention, Regina writes short stories and teaches maths and physics. She lives in Brisbane with her husband and son.

Rhys Hughes has been a published writer for almost twenty years and in that time he has written six hundred stories, published twenty books and been translated into ten different languages. “The Lives and Spacetimes of Thornton Excelsior” is exactly the sort of fiction he most enjoys writing; but the market for this kind of absurdist fantasy seems to be rather limited these days. If you enjoyed it, why not consider purchasing his latest ebook, a bumper collection of one hundred stories called The Tellmenow Isitsöornot, available from Smashwords here: http://www.smashwords.com/books/view/88734.

Stephen Theaker is the eponymous co-editor of Theaker’s Quarterly Fiction, and writes many of its reviews. His reviews have also appeared in otherwise respectable publications such as Prism, Black Static and the BFS Journal. He has used the word “whom” twice in this issue but isn’t entirely confident that he used it correctly.

Z.J. Woods writes and otherwise wastes time in Virginia. His strange little digressions can be found in several ezines and at his website, http://zjwoods.com.

All thirty-seven previous previous issues of our magazine are available for free download, and in print, from here.
Posted by Stephen Theaker