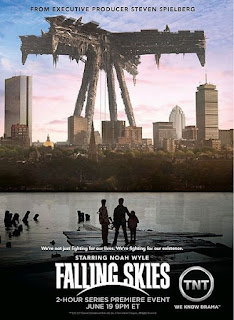 In my review of the Falling Skies graphic novel I said I didn’t plan to watch the programme, but the summer television drought left me high and dry, and reading my review after publication, I thought it seemed a bit unfair. A programme about the aftermath of an alien invasion, and I wasn’t going to watch a single episode? I could hear my ten-year-old self screaming at me from the wastelands of eighties television. (Dunno what he was complaining about—I let him watch a series and a half of the new V.) Ultimately, I didn’t love Falling Skies, Season 1, but I did enjoy it much more than expected. I’d have been very disappointed if a second season hadn’t been forthcoming.

Episode one throws the viewer straight into the action, running to keep up as the surviving humans, including Tom Mason and his sons, evacuate what’s left of Boston and form a makeshift army. In my review of the comic, I complained that it didn’t seem to open up many story possibilities, but the first episode takes care of that, showing this handful of civilians as part of a larger effort; this is a war, with hundreds of people on the move, small groups being sent out on sorties, and an invading force of spider-like skitters and robot soldiers—who don’t actually care too much about hunting down the surviving humans; they’re mostly content to leave traps and set ambushes.

One thing I very much liked about the first episode was that the lead was a history professor, and one whose special interest was military history. To me this promised a strategic, tactical war against the occupiers, drawing on our world’s long, proud history of war, and I was a little disappointed at how rarely this came into play as the series progressed: he’s less a source of tactical wisdom, more a source of ethics and conscience. He ends up being the one who always has to be told (usually by Captain Dan Weaver, played by Will Patton), you want to do the right thing, but we need a plan first.

Mason is often terribly—and disappointingly—naive in his approach. In episode two he experiences the problem with taking family members on a military patrol (though you’d think it a lesson few would need)—unable to walk away when one is captured, he is forced to hand over their weapons and the whole team is put in jeopardy. And he doesn’t learn the lesson even then, and takes his son and his son’s girlfriend out on a mission with him again. If he was here he’d probably tell me that it’s good to care about every member of your team, but it’s no way to run a guerilla war.

Other elements of the programme that left me a little underwhelmed included a series of mawkish special moments with a girl whose Christian faith has stayed strong through the invasion, the brilliant Steven Weber sticking around for fewer episodes than I’d have liked, the tendency of black characters to come a cropper, and a lovable rogue who used to lead a gang of rapists. Joe Cornish’s gun rule (last man to draw a gun wins the situation, regardless of how many other guns are already pointed at his allies) comes into play in episode eight, but that’s something I’ve almost come to enjoy.

On the other hand, there was much that was good: the queer sense of revulsion upon seeing that skitters are affectionate towards the harnessed children; the moment when a school pupil wonders why the multi-legged skitters would create bipedal robots; the sense that we are watching a big story unfold. Making notes for this review after watching episode three, I felt sure there had been a mistake—surely that was episode nine or ten, given how much had already happened?

It is also a programme full of interesting faces, not least those of the leads. Moon Bloodgood, playing Anne Glass, a pediatrican learning to cope with alien autopsies and battlefield wounds, is very beautiful, but it’s played down—this isn’t the kind of apocalypse where make-up remains a priority; similarly, Noah Wyle is as ever impossibly handsome, but his face is always dirty, his beard scruffy, his eyes full of pain. Both play intelligent characters; both convince in that regard. It makes a nice change, given that US shows tend to cast quite bland-looking lead actors. And beards don’t half look fantastic in HD.

Overall, not a knockout first series, but much more original than I expected. How many drama programmes—genre or not—have shown a fictional war from start to finish? The stomping robotic soldiers beg comparison with Battlestar Galactica, especially the episodes set on New Caprica. That’s a comparison with which any programme would struggle, but so far this is a much cosier catastrophe than the Cylon occupation; one in which there are still a few minutes spare for skateboarding. That isn’t a bad thing: BSG could be pretty gruelling. More tactics and mysteries, less soap and stupidity, and this could be a programme to reckon with.
Posted by Stephen Theaker