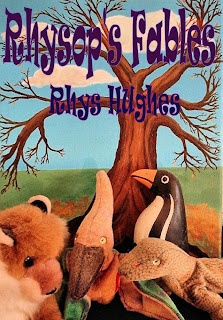 Having just finished reading Rhysop’s Fables by Rhys Hughes (Gloomy Seahorse Press, ebook, 2593ll), a squirrel decided to visit his friend the blue whale. He rode on a train, jumped a few fences, and climbed a few trees, and in the time it takes to say as much he was looking his immense friend in the face.

“Good morning,” said the hundreds of thousands of krill that were trying without success to escape the whale’s baleen plates.

The whale shook his head sadly. (The squirrel gripped the sides of his little sailing nut as it was buffeted by the resulting waves.) “I’m so tired of krill, so tired of water sloshing around my mouth all day. I envy you, squirrel, with your diet of nice dry nuts, I really do.”

“Come stay with me a while then,” said the squirrel. “I’ve plenty of nuts stored away.”

“That sounds wonderful,” said the whale. “A change would be as good as a vest.”

“Have you been in the ocean lately? A good set of thermals is what I really need, but since they aren’t available in my size, a change will have to do.”

The squirrel nodded, and the two of them climbed a few trees, jumped a few fences, and rode on a train. In the time it takes to say as much they were sitting on a branch outside the squirrel’s hole.

The branch immediately broke. The whale fell to the ground and bruised his tail. The squirrel, however, managed to grab onto another branch and saved himself.

¶ The high life isn’t for everyone, especially not blue whales!

The squirrel placed a cold compress upon his friend’s tail.

“You wait here,” he said, “and I’ll go and get the key to my nutty cupboard.”

He scampered up to his little hole, went to his little bed, and slipped a golden key out from under his fluffy little pillow. He carried it down the tree and unlocked the little red door to his nutty cupboard.

The blue whale gasped in amazement. Inside there were one hundred and fifty gorgeous, golden nuts. Some were tiny, some were medium-sized, but all looked blinking delicious.

“Would I?” said the whale. “Of course! Just poke a hole in my baleen and push it in!”

It was the most delicious thing the whale had ever tasted. The squirrel had one too, and then closed and locked the little red door.

For the rest of the day the two of them chatted as old friends will, their conversation covering such topics as politics, the environment, gossip about their mutual friends and enemies, films they had seen and books they had read.

The blue whale liked the sound of Rhysop’s Fables and decided to buy himself a copy, but, that aside, his mind was on just one thing: to eat more of those nuts.

The golden key! He had it!

When the squirrel awoke he climbed down the tree to see the red door to his nuts wide open, the store obviously depleted, and his friend the whale gingerly holding his tummy. The squirrel was sad.

“I’m sorry,” said the whale. “I ate seventy-four of your nuts, one after the other. I just couldn’t stop pushing your nuts into my mouth. Consuming each one made me want another just like it, and now here we are, our friendship betrayed by my whale-sized greed. I’m so sorry. Will you still be my friend?”

“All you had to do was ask,” said the squirrel. “I should have realised that while one nut was enough for me, it couldn’t possibly be enough for a big fellow like you. As long as you enjoyed them all, that’s the main thing.”

“I did, I did,” said the whale. “Although after fifty or sixty the fun went out of it. It began to feel rather mechanical. Maybe the nuts toward the back of your store aren’t as tasty as those at the front.”

The squirrel took one of the remaining nuts and tried it. “No,” he said. “As lovely as the rest. You just let your palate get jaded, and forgot to take the time to enjoy each individual nut. Having said that, I’ve never eaten so many in one go, and now I’m wondering what it would be like.”

And with that the squirrel and the whale ate the remaining seventy-three nuts, and thoroughly enjoyed them. When the store was empty the whale thrashed his tail a bit, causing eight large nuts to fall from the trees. They enjoyed these as much as the others, but took their time with them.

¶ If you squirrel everything away, you’ll never have a whale of a time. And though nuts, like jokes, wisdom and fables, can be most effective when taken in small quantities, let yourself have the pleasure of gorging on them once in a while.
Posted by Stephen Theaker