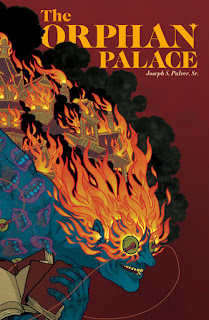 What would be an effective method to convey a character’s emotion of overwhelming hatred, say for his parents? Here’s how Joseph S. Pulver Sr goes about it in The Orphan Palace (Chômu Press, pb, 376pp):


These are techniques that Pulver uses throughout the novel: ellipses (more than in any other book I’ve read), sentence fragments or just single isolated words, words capitalised for emphasis, words run together, and of course repetition (of the fourteen words in this fragment, eight are just the word “hate”). It doesn’t express, it just reminds us what the author should have found some means of expressing.

To describe The Orphan Palace as experimental fiction doesn’t give much of an indication of how Pulver organises his material. “Stream-of-consciousness” isn’t a term that helps much either, because the chains of sentence fragments, strung along long threads of ellipses like a funky gothic necklace, are not merely an attempt to reproduce the inner monologue of the protagonist. This is fairly typical:

The blind moon-tempest mask ringing with translations of All Fall Down-rises, its seven torch-eyes writhe…shines as a shadow drinking the tear-miles of open blood veins…”


I suppose you could call it a prose-poem, or beat poetry, but what it brings to mind most readily is the lyric sheet of a heavy metal band. Like an extended rock opera, there are whole pages where no line reaches the other side of the page, and no sentence finds its full stop, on occasion even using the “/” character to break the line. Pulver quotes Springsteen before the book gets going, and lists his preferred soundtrack at the end. Since the advent of Spotify it would be possible for readers to listen to Pulver’s recommended tracks while working through the book, but the artists he cites (from Kronos Quartet to Steve Earle) have little in common with his unvarying vocabulary of blood, death, sexual predation and insanity, familiar to me from early eighties metal bands (Iron Maiden, Judas Priest, Accept, Dio, early Metallica) but no doubt still the core business of contemporary metal and goth bands. When not staring into the Abyss, Pulver has us adrift in a small-town America of sleazy bars and cheap motels, whisky slugged from the bottle and cold coffee from paper cups, easy girls drawn to the mysterious drifter (morphing into the iconography of Hair Metal).

It’s not all improvised coda: there is a plot, and it concerns Cardigan, ex-inmate of an occult, abusive orphanage, hard-drinker, arsonist and serial killer, who is making his way East across the USA, shooting up lonely gas stations, burning down motels, picking up women in bars before murdering them and mutilating their bodies. He’s on a mission of revenge against the evil Dr Archer, whose obscure but depraved experiments on the kids in his charge have turned Cardigan into a monster. Along the way, Cardigan tries to penetrate the mystery of a series of pulp noirish novels he finds in every motel room he visits, and is advised along the way by a number of supernatural or perhaps hallucinatory mentors.

A lot of strange things happen: plot devices are introduced (such as a coin to magically detect lies, and a ghoulish impregnation) and are promptly forgotten about. Stranger still, Cardigan, who is seen casually slashing up women for fun in the first half of the book, is by the second half almost one of the good guys, at worst troubled, if rather more than misunderstood. An old friend from the orphanage urges him to give up his quest and settle down to run a beachside bar with him, as though we had switched channels from American Psycho and found ourselves in the closing scenes of The Shawshank Redemption. His violent outbursts start to take on a more moralising intent. He murders a man who tries to hit a dog in a park, and I got the impression that I was invited to applaud this vigilante justice. He confronts a violent pimp and sets the prostitutes free, imploring them to go and seek the light. Oddest of all, Cardigan shoots the pimp’s bodyguards, only to find them alive and well on the next page, and slays them again.

Over and above such slips, any reader without amnesia or psychopathy should be wondering how this is the same character who was driving around with a woman’s severed nipple in his pocket just a few days previously. And despite over three hundred and fifty pages of impulsive slaughter, theft and arson, the police only appear in the book once, and show no interest in Cardigan’s rampage. While I wasn’t expecting social realism, the complete lack of consequences in The Orphan Palace gives it the feel of somebody who has discovered a cheat to turn off the cops and gain powers of invincibility in Grand Theft Auto.

The best that can be said of The Orphan Palace is that it has a restless, grotesque fecundity, like the random strings of images and words that one is aware of just before sleep descends:


But the language sticks so closely to the clichés of Lovecraftian gothic horror that it becomes predictable. The slackness of the narrative, combined with these long stretches of formless ranting about the Hounds of Tindalos and other such touchstones of weird fiction, make The Orphan Palace a slog through well-trodden territory with little compensation other than the grim satisfaction of having made it to the last page.

Still, you have to hand it to Chômu Press. Since 2010 they have been publishing unclassifiable out-on-a-limb fiction on a punishing schedule (twenty books at my last count), in elegantly strange covers that ought to be the envy of mainstream publishers. Like specialist species of insect hiding away in their narrow ecological niches, small presses have traditionally thrived in very well-defined sub-genres where there is a limited but proven supply of readers. Chômu (Japanese for “dreaming butterfly”) is a different creature altogether, willing, one might even say anxious, to take chances on authors who are similarly drawn to such risky behaviour in their writing. Sometimes these risks pay off (see the review of Justin Isis’s collection of short stories from TQF35), but not here.
Posted by Stephen Theaker