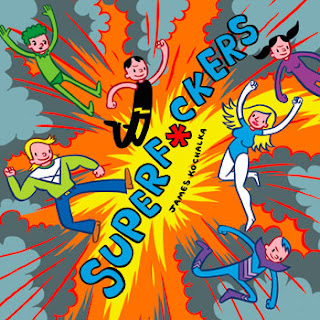 Super F*ckers by James Kochalka (Top Shelf, digital collection, 146pp) is one of the most puerile things I’ve ever read, and therein lies its charm. Its characters throw swears around like they’ve just learnt them, dumb teenagers who have realised they can make their peers laugh with mindless abuse despite a lack of wit. The book is a spoof on teams like the Legion of Super-Heroes, the Justice Society of America and the Teen Titans, with their club houses, rule books and membership try-outs.

Team leader, at least as long as Superdan and Percy are lost in Dimension Zero, is Jack Krak, the Motherfucker, a Steven Gilligan* in black tights who is slowly losing his mind, but gets most of the best lines. Almost everything he says is funny, for example (picking out a couple of the less offensive lines): “I’ve got a super thirst ’cause I am a super DUDE” or “I’m CHRISTIAN now, motherfucker! Check it out!” (*I know that barely anyone reading this knew our chum Steven Gilligan, but trust me, he talked exactly like the Motherfucker—and he would have loved this book.)

Jack Krak’s team-mates include sweet but unloved Grotessa, whose symbiotic partner Grotus achieves sudden popularity when the guys realise they can get high smoking his slime; Princess Sunshine, who has to brush her hair exactly one thousand times to charge her radiant beauty powers; and newbie Wilbur, a.k.a. Computer Fist, who survives the tryouts (wannabes fight in a pit and the survivor joins the team!) but makes the mistake of admitting he’s also used his CPU-enhanced gauntlets for beating a different kind of meat. Only Vortex ever seems to save the universe, and he doesn’t even wear a costume.

Definitely not a book for everyone, and certainly not for children (although any scamps who got their hands on it would love it—nothing kids like more than swearing and jokes about wee and fighting), but it’s bright, colourful, obscene and highly childish, and a great deal of fun if you’re in the right mood. Every few pages or so there was a panel I just had to show Mrs Theaker, the look on her face being very nearly as entertaining as the book itself.
Posted by Stephen Theaker