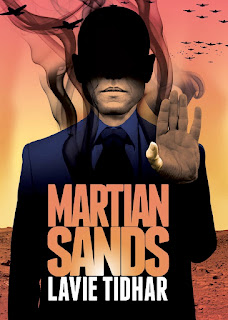 In Martian Sands by Lavie Tidhar (PS Publishing, hb, 224pp), Mars has been settled. The New Israelis are governed by a succession of simulacra, Jewish leaders of the past recreated to act as figurehead prime ministers, but their new Golda Meir isn’t sticking to her programming. “Something is fundamentally flawed with reality,” she tells Miriam Elezra, the woman who commissioned her. There are rumours of time travel experiments, rumours the reader knows to be true having already seen Bill Glimmung in the Oval Office on December 7, 1941, the day before the first death camp opens, offering weapons to Franklin Delano Roosevelt in return for preventing the Holocaust. And yet on Mars we see that Bill Glimmung is a character from the film Martian Sands, “Elvis Mandela’s second masterpiece”. Carl Stone, who built the Golda, has four arms, two extras grafted on to reflect his status as “a Martian warrior, reincarnated in an alien world”. His Revolutionary Brotherhood of Martian Warriors share Barsoomian dreams, visions supposedly sent by their emperor. The most mysterious beings on Mars are the Others, artificial intelligences sometimes ferried by compliant humans, sometimes controlling host bodies. All roads lead to a remote kibbutz in the FDR mountains, the same kibbutz to which Josh has just made the kind of manure sale that could do wonders for his career.

Fans of Philip K. Dick will spot several tips of the hat here – “The Empire Never Ended”, time out of joint, and Ubiquitous Cigarettes (Ubiks for short) – and the quirky cleverness of combining Dick’s themes with the Mars of Edgar Rice Burroughs might lead people to expect a light-hearted book. It often is, for example in a sequence in which intelligent bullets jostle in a gun, but the book is dedicated to the author’s grandparents, “the ones I knew, and the ones I didn’t”. Despite the risks inherent in the New Israeli attempt to change the course of history, if it were possible, would they be justified in trying? Other writers have portrayed old, decadent Earths ruled by nobles who remain after all others have left, but Tidhar explores, here and in other stories, a related but striking idea: that space could be colonised by the poor and unhappy, who might leave our relatively comfortable home planet in search of better lives. Martian Sands is the work of a serious writer who writes entertainingly, who can be funny, political, speculative, provocative and charming, all at the same time.

The author has mentioned a sequel on Twitter, though he thinks it might be too weird for publication. I’m not going to pretend I understood everything that was going on in Martian Sands, especially towards the end – it’s the kind of book that would repay a second reading, and a tutorial or two wouldn’t hurt – but I would love to read a sequel that was even weirder. Tidhar writes equally well in several genres; Cloud Permutations and Gorel and the Pot-Bellied God were, I thought, both excellent, but so dissimilar that one would be hard-pressed without title pages to identify them as the product of a single author. It seemed to me when reading Martian Sands that for Tidhar “classic science fiction” in the style of Silverberg, Brunner and Dick’s novels of the sixties is just another genre to which he can turn his hand as ably as he does all the others. In some ways that’s almost galling (“Here’s a Hugo winner I made earlier!”), but I hope he does it again.