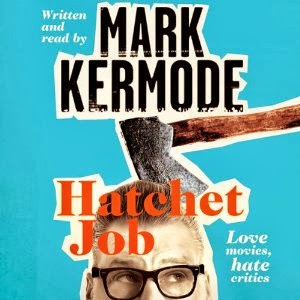 In Hatchet Job (Picador, digital audiobook, 7 hrs 53 mins; Audible purchase) Mark Kermode, perhaps the UK’s most prominent film critic and certainly one of its most respected, covers all the big issues involved in writing reviews: being honest and only saying things you actually believe, trying to get the facts right, writing well, being entertaining, and, sometimes, changing your mind. He talks about the review as an art form in itself, and speaks scathingly of the idea that the only critics of any worth are those hoping to become film-makers. Kevin Smith, who espoused that view and, for example, cancelled the screenings of Red State for UK critics at the last minute, comes in for a great deal of criticism, as does Harry Knowles of Ain’t It Cool News, for his habit of publishing any old nonsense that his readers might find interesting, whatever its source, and his practice of publishing anonymous reviews of unfinished films.

A big concern for Kermode is what gives a review weight. Not just the words, but the person, publication and reputations standing behind them. He’s hardly the kind of fuddy-duddy who says all online writing is a worthless, mindless babble – as he explains, everyone writes online now, and he has lots of kind things to say about online sites who have what he believes is a credible ethos, such as Film Threat. But he argues persuasively that a paid, named reviewer puts their reputation and livelihood on the line with every review, as does the publication that chooses to publish it, giving it a credibility that cannot be matched by an anonymous piece on Amazon.

A key phrase in the book is: “Opinions are ephemeral, but professional conduct is sacrosanct.” Kermode tells a story about a falling-out with a distributor, thinking it was because he slated their film, only to realise it was because he’d implied that they hadn’t even tried to market it. It would be depressing to hear Kermode talk about Richard Bacon and Johnny Vaughan’s allegedly unethical approach to film reviewing if he didn’t tell the stories in such a funny way. Bacon didn’t watch the films he reviewed. That’s bad enough. But in fact, he wasn’t writing the reviews either, and hadn’t even read them!

Sock-puppeteers in the book world like Stephen Leather and R.J. Ellory also attract his withering gaze, though not all bad behaviour comes in for such criticism: he seems overly forgiving of hero Ken Russell’s bashing Alexander Walker over the head with a copy of his own review (or at least a rolled-up copy of the newspaper containing it). I think he takes an aggressive response to reviews almost as par for the course, having experienced similar things himself. As he explains: “many of the people who you most admire don’t see much point in what you’re doing”. If Ken Russell had attacked Walker’s integrity – as Kermode once did himself, something he now regrets – that would have been a different matter.

Kermode reads the audiobook himself, which of course enhances it immeasurably, making it a first-rate bonus feature to the Kermode and Mayo film show, though at first it takes some getting used to: he’s speaking so slowly and carefully! There are some points at which, endearingly, and I think probably self-consciously (their careers do after all have certain parallels, except that Kermode hasn’t cocked up his opportunities at the BBC), Kermode strays into Alan Partridge territory (don’t we all?). A mention of the “information superhighway”. “You’ve remembered it wrong. You’ve remembered it wrong. You’ve remembered it wrong. But I hadn’t.” Chapter 6’s morning routine: “Monday morning. Alarm. Up. Wash. Let the dog out. Dog doesn’t want to go out. Insist dog goes out. Dog not going out. Dog goes and lies on the sofa.”

Those were some of my favourite moments, and the audiobook reminded me of Alan in another way, in that like I, Partridge, once I began listening to Hatchet Job I didn’t stop, going through the whole thing in a couple of days. It’s funny, moving and angry, all in the right places at the right time. Kermode knows what goes where, and why. It is recommended to every novice reviewer, and even old hands may find it useful. The book gets a bit soppy towards the end, as Kermode relates first the joy of seeing a childhood favourite again (Jeremy) and then his surrender to A.I. Artificial Intelligence (a film I watched with my fist in my mouth to stop myself bawling), followed by his excruciatingly awkward apology to Steven Spielberg for having got it wrong. So it’s a relief at the end to hear him say, partly in response to news of a new Michael Bay Transformers film, “Where the hell did I leave that hatchet?”
Posted by Stephen Theaker