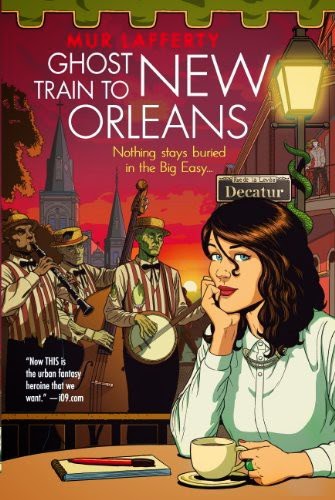 Her travel guide to New York having done well, despite a series of supernatural calamities that occurred in the course of its writing, Zoë Norris is given a new assignment by her editor at Underground Publishing: the supernatural tourist’s guide to New Orleans. She takes a hand-picked team of writers with her: two vampires, one of whom would kill her now if it wasn’t against company policy, a goddess of death, a Valkyrie, and a baby dragon, Bertie.

Her sadsack boyfriend Arthur tags along too. He’s on the way out, both metaphorically, because their relationship isn’t going anywhere, and literally, in that he’s been bitten by a zombie and he’s out of the magic medicine that has so far stopped him turning. (“Would he rot? Would he stink? What would sex be like?”) His dangerous search for a cure comes at an inconvenient time. Zoë has a book to edit, undead parties to attend, voodoo gods to meet.

Plus, the city itself is being a bit of a pain in the neck. Zoë has just found out that she is a citytalker, a supernatural being herself, and in New Orleans she’ll find out much more about what that means – the powers it gives her, and the target it paints on her back. She’ll get to know a friendly ghost who once had similar powers, find out more about the supposed peacekeeping activities of the Public Works, and have her willpower tested by her attraction to a series of unsuitable hunks.

The tone is light, misery when it comes played as quick, sharp melodrama. It’s a corner of the Buffyverse where demons and vampires hold down steady jobs instead of working towards the apocalypse. The characters are entertainingly tetchy, ready to jump down each other’s throats (or sink fangs into them) at the wrong word. The writers are thoroughly unimpressed with their editor, and let her know about it constantly. Zoë is little better herself – she and Arthur are consistently grumpy with everyone from whom they need help.

The interpolation between the chapters of this book of chapters and appendices of Zoë’s finished tourist guide was a bit off-putting in the contents list, but they are kept short and do nothing to break the flow of the book, being used subtly to underline important details and foreshadow future events. It is a sequel and there’s a fair bit of backstory to catch up on, but the setting of a new city makes it easy to jump in.

Ghost Train to New Orleans (Orbit, ebook, 4604ll) should appeal to anyone who enjoyed Paul Magrs’ Brenda novels, and anyone who enjoys this should give those a look too. Fantasy fans will enjoy bits like the nods to Red Dwarf (her lazy goldfish Lister and his friend Kochanski), Doctor Who (Tom Baker or David Tennant?), and “the George R.R. Martin fitness plan” (lugging his books around). I had a lot of fun with this book. It finds the sweet spot between too silly and too serious and steams straight through it. Recommended.
Posted by Stephen Theaker