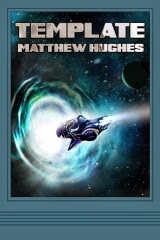 There are few things I find more enjoyable than a Matthew Hughes novel, and it’s a struggle to stop myself gorging on them at the expense of everything else. Template (self-published, ebook, 4865ll) is a book from 2008, new to me, recently republished. Like most of the Hughes books previously reviewed here, it is set among the Ten Thousand worlds of the Spray, under the subtle rule of the Archonate.

Conn Labro is an exceptional sportsman, brilliant at everything from fencing to chess, and he takes on all-comers at Horder’s Gaming Emporium – which owns him. Hallis Tharp has paid in advance for a lifetime of his services: a weekly two-hour game of paduay. On one occasion, Tharp is not ready for the game, and Conn goes to investigate.

Tharp is dead, and he has left Conn with enough money to buy his freedom, as well as the deed to a mysterious property, in the shape of a small bead. Troubled by feelings he does not understand, and after an attempt upon his own life, Conn leaves his homeworld Thrais and travels with Tharp’s concerned neighbour Jenore to Old Earth and beyond to solve the mystery.

These are the adventures of an innocent abroad, though in this case the innocent is not from some idyllic, magical paradise. He’s from a planet where no one does anything unless it benefits them financially, and is “pitched from its familiar confines into a wider universe that was rife with whole worlds ruled by mass delusion” – that is, the delusion that one should ever do anything without being paid.

When it serves to further his goals, Conn sometimes describes himself as a professional duellist. And that’s how he approaches every conversation, like a fencing match to be won or lost. A character who so unerringly finds the right phrase with which to run through his opponents is perhaps unrealistic, but it’s highly enjoyable. He has one blind spot: right over his heart.

My reviews of this author’s books must now come with the disclaimer that I’m a fan. His books make me feel like a mouse whose pleasure centres are being deliberately tripped in a scientific experiment upon its brain. That disclaimer aside, I thought this was excellent. Conn has a fascinating personality, his romance with Jenore is sweet, the mysteries intrigue and the action excites. Brilliant.
Posted by Stephen Theaker