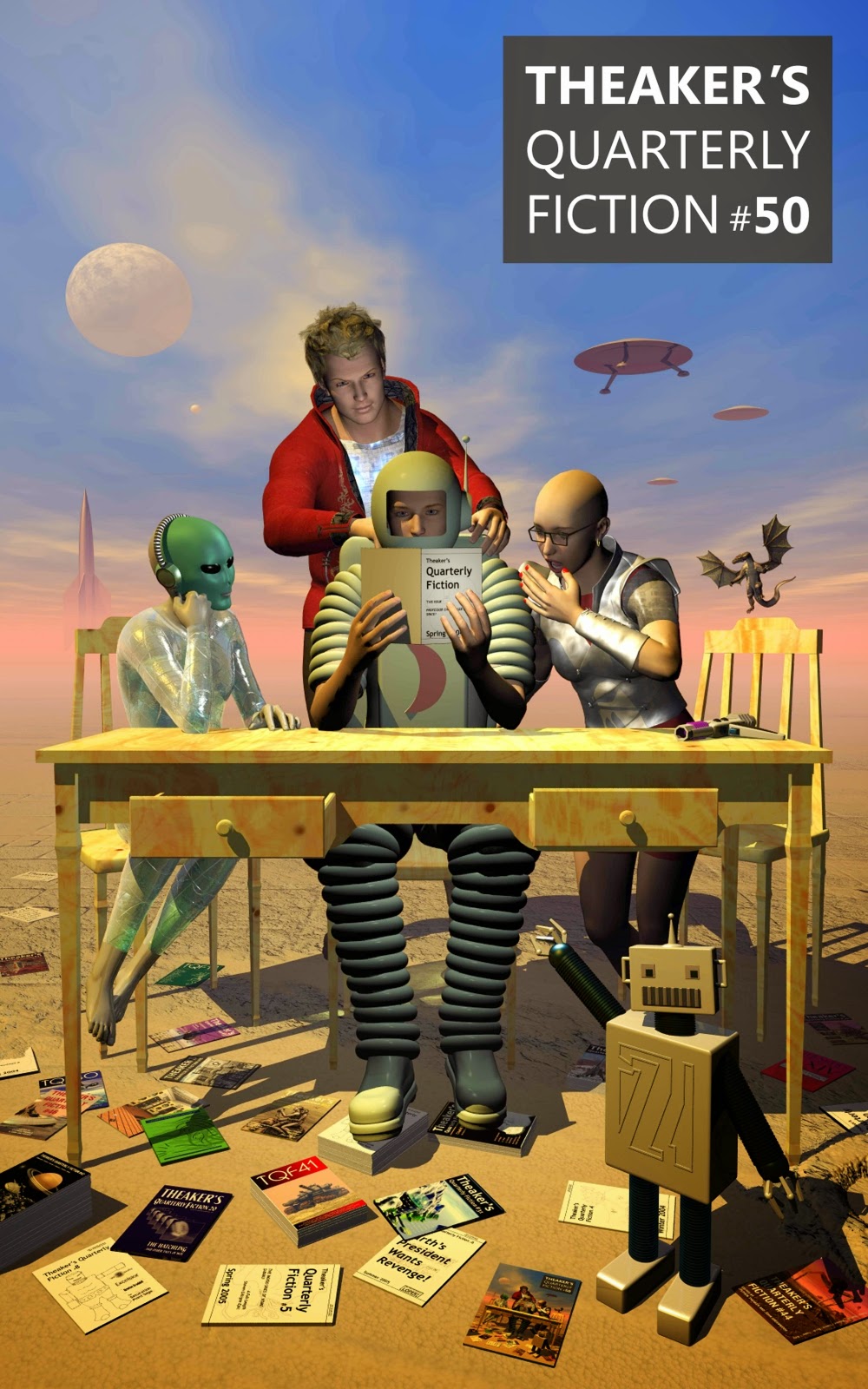 Plus reviews from Douglas J. Ogurek, Howard Watts, Jacob Edwards and Stephen Theaker. Stephen and members of the reviews team answer your questions in “Ask Theaker’s”! Cover artist Howard Watts takes us through his process in “Artful Theakering”! And there’s a round-up of everything Stephen Theaker read last year but didn’t have time to review! Happy fiftieth to us!


Here are the contributors to this grandest of issues:

Antonella Coriander’s story in this issue, “Crystal Castle Crashers”, is the fourth consecutive episode of her ongoing Oulippean serial.

Douglas J. Ogurek lives in a Chicago suburb with the woman whose husband he is and their five pets. This time he reviews the films As Above, So Below, The Hunger Games: Mockinjay, Part 1 and Tusk, answers question in “Ask Theaker’s!”, and supplies a story too: “Save the Dog”, a sequel of sorts to “NON” (TQF33). See http://www.douglasjogurek.weebly.com.

Howard Phillips is a dissolute poet whose contributions to this zine have ranged from the mediocre to the abysmal. In this issue he begins a follow-up to the still unfinished Saturation Point Saga: “Love at First Sight” is the first episode of A Dim Star Is Born.

Howard Watts is a writer, artist and composer living in Seaford who provides the cover art for this issue, “Artful Theakering” (an article on his covers for us to date), a story (“Dodge Sidestep’s Second Dastardly Plan”), and a review of Borderlands the Pre-Sequel, as well as contributing to “Ask Theaker’s!”.

Jacob Edwards reviews Gatchman and Interstellar in this issue, and contributes to “Ask Theaker’s!”. This writer, poet and recovering lexiphanicist’s website is at http://www.jacobedwards.id.au, his Facebook page at https://www.facebook.com/JacobEdwardsWriter.

John Greenwood, co-editor and guiding ethical light, supplies this issue with the story “A Mare’s Nest”.

Matthew Amundsen follows up “House of Nowhere” (TQF35) with a new novella, “A Murder in Heaven”. He has written extensive literary and music criticism for various alternative weeklies. He now lives in Minneapolis, Minnesota, with his wife and daughter.

Michael Wyndham Thomas writes “One Is One”. We previously published his novels The Mercury Annual and Pilgrims at the White Horizon, extracts from both of which are sprinkled through our zine’s history, beginning all the way back in TQF8.

Rafe McGregor provides this issue with “The Wrong Doctor”, which follows “Murder in the Minster” (TQF25), “The Chapel on the Headland” (TQF34) and “The Last Testament” (TQF37). Rafe is the author of over sixty short stories, novellas, magazine articles, and journal papers. His work includes crime fiction, weird tales, military history, and academic philosophy. This is Roderick Langham's fourth outing and takes place twenty-eight years after the misadventure in the Himalayas with which regular readers of TQF may be familiar.

Stephen Theaker lives with three slightly smaller Theakers. In this issue he reviews Engines of War, Happy, In the Broken Birdcage of Kathleen Fair, Invincible, Vol. 17, Megalex and The X-Files: Season 10, Vol. 1, and rounds up everything else he read this year.

Walt Brunston, follows his adaptation of a Space University Trent episode (TQF13) – we still miss that show! – with “The Morning of Seventeen Suns”, the first astounding adventure of the Two Husbands.


Bonus! To celebrate our semi-centenary, all our Amazon exclusive ebooks will be absolutely free this week: Professor Challenger in Space, Quiet, the Tin Can Brains Are Hunting!, The Fear Man, His Nerves Extruded, The Doom That Came to Sea Base Delta, The Day the Moon Wept Blood, The Mercury Annual and Pilgrims at the White Horizon.

As ever, all back issues of Theaker’s Quarterly Fiction are available for free download.
Posted by Stephen Theaker