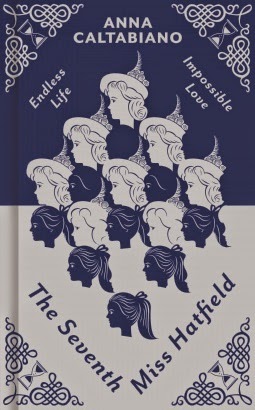 The Seventh Miss Hatfield (Gollancz, ebook, 3320ll) is a novel by Anna Caltabiano, suitable for young teenagers, about a young woman who impersonates the niece of Mr Beauford, a wealthy steel magnate, in order to steal one of his paintings. The year is 1904. While undercover she begins to fall for the steel magnate’s son, Henley, who quickly rumbles her as an imposter, and what was originally planned as a quick theft turns into a months-long stay. Handsome Henley is promised in marriage to another, the vain and proud Christine Porter, and though the thief knows she cannot stay, and certainly cannot marry the man, the thought of separation is breaking both of their hearts.

So why, you might be asking (and probably not for the first time), is this book being reviewed here? Because it’s being sold as a literary fantasy, rather than a historical romance. Look at that lovely cover. I expected a literary modern fantasy in the vein of The Rabbit Back Literature Society, but got instead a book that would have been too tame and unadventurous for my children.

There is a fantasy twist to the story sketched out above. The indolent thief begins the book as Cynthia, an eleven-year-old girl in 1954, who upon visiting the home of the mysterious Miss Hatfield (sixth of that name) is dosed with a drop of the elixir of life, turning Cynthia into the seventh Miss Hatfield. Now eternal, barring accidents, they have the ability to travel in time, and the sixth Miss Hatfield uses that to age her successor to adulthood. Before the former Cynthia can get on with the fun of being a time-travelling eternal, Miss Hatfield number six has a little job for her: the painting theft mentioned above.

It takes a conversation that lasts almost a fifth of the book to get to that point, and from then on we are into romance territory, where the only real nods to time travel are that number seven has a slightly poorly tummy, which gets worse the longer she stays in the past. This is used in an attempt to add a bit of urgency to the proceedings, albeit with unintentionally comic effect as number seven mentions it, then casually notes another week or three having gone by. It doesn’t help that our protagonist isn’t worthy of that label. She is slow to act, inertia her primary characteristic. If she were a Doctor Who companion every episode would last a fortnight. All she needs to do is steal a painting, or even destroy it – there’s no need at all for her to spend months waiting for the right opportunity.

She doesn’t seem to worry too much about number six’s strange actions towards her, and just follows her orders. She is exceptionally callow and selfish, being for example quite happy to let everyone (including Mr Beauford himself) think Mr Beauford is a lunatic when she knows full well he is not, just in case. She sets great store on being polite to Mr Beauford’s servants, but doesn’t worry too much about the overall unfairness of a system that would leave a young woman being grateful to receive the scrapings from her plate.

Maybe that’s down to Cynthia’s original age, but the book doesn’t make that explicit. The way that she is a eleven-year-old in a twenty-five-year-old body could potentially have been interesting, though that potential has been explored previously in films like Big and Freaky Friday, but the book shows no interest in this. There is no sign here that adult relationships are any different to those of eleven-year-olds. Cynthia grows up in a flash, but the book doesn’t explore what she has missed in the interim. You can’t help thinking that if the book wanted a grown-up main character, it might as well have started with one.

This is a below average book that feels as if it is being pitched to quite the wrong audience. As a novel for young teenagers it might find an appreciative audience, but as a literary fantasy novel for adults it’s some way out of its depth. The afterword explains that the author was seventeen when she wrote this. I’d have been very proud to write a book as good as this when I was that age (or indeed at any age), but, unfair as it is, it’s hard not to read that and think, right, okay, that probably explains why the book is the way that it is.  **
Posted by Stephen Theaker