The Hobbit: The Battle of the Five Armies | review by Jacob Edwards 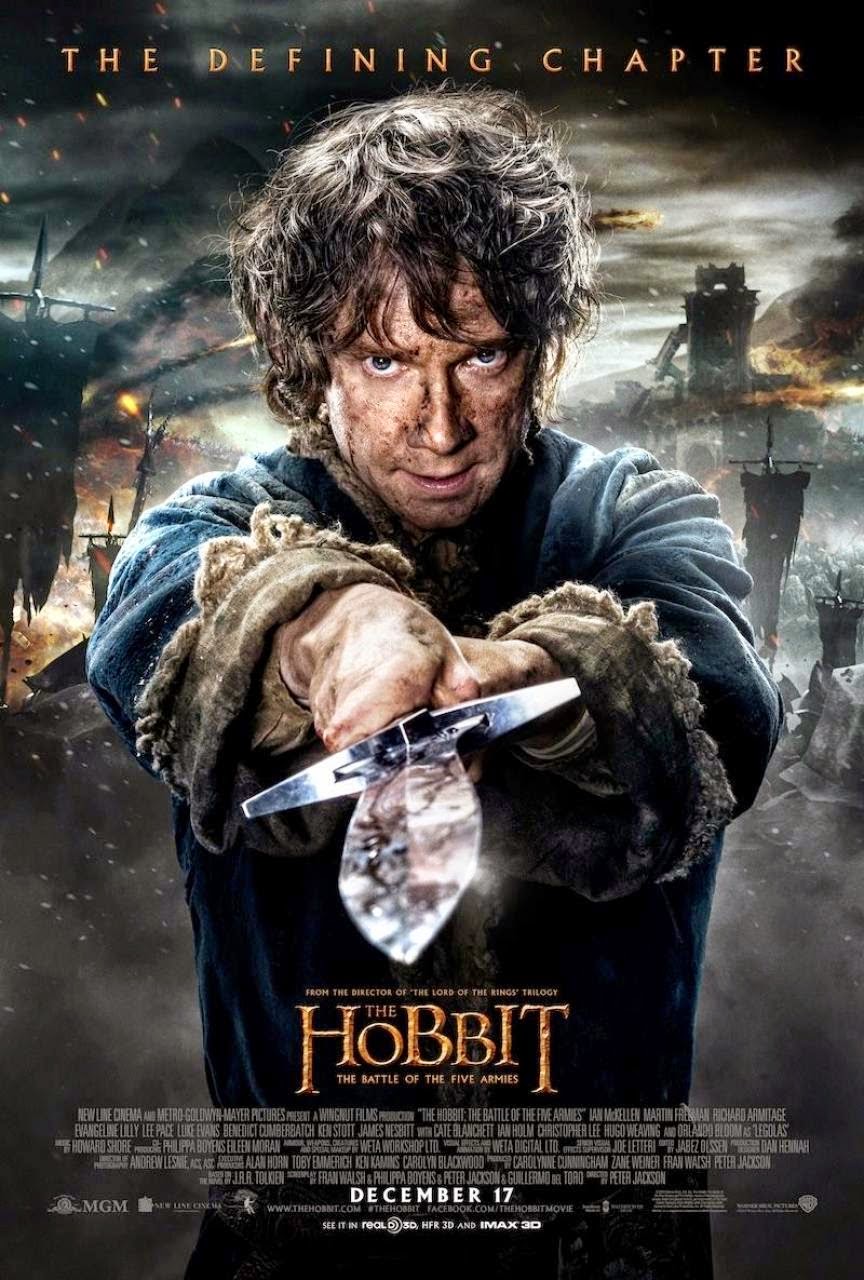 For many months I disavowed my ring finger’s insistent tingle to review
The Battle of the Five Armies. This was not because I hold J.R.R. Tolkien or Peter Jackson in any way sacred (although I do esteem The Frighteners), but rather because there seemed no way into the task. I felt, like Bilbo Baggins, too small to embark upon such an adventure. I hadn’t even read The Hobbit.

Yet, review the film I shall, though many others have set out before me, better prepared and more assured of purpose. (There’s even now in my possession a map marked here be dragons.) Review it I shall, even if this should require so foolhardy an act as to cross the streams, Ghostbusters-style, and write in the first person.

Someone once told me never to write non-fiction in the first person. It’s advice I’ve taken to heart even while retaining no memory of whom so impressed me with the tenet. Their face is gone and so too the voice, leaving nothing but Yoda pastiche. “Review. Or review not. There is no I.”

And why is this? Because there’s too much danger of slipping into memoir (or, heaven forbid, blogging). This is now inevitable. I apologise.

I came to The Battle of the Five Armies having seen and mostly enjoyed both the first two instalments of the Hobbit trilogy and also Peter Jackson’s three-pronged take on The Lord of the Rings. This latter was a book I had read, its three volumes bound together in one bitter pill and shoved down my throat at university as part of a feminism in electric sheep’s clothing degree. I remember a distended week of Tolkien, mitigated only by old Tom Bombadil singing ditties about himself in the third person. I remember the lecturer perched like Smaug atop her pedestal, steaming with self-importance. I remember scoring exactly the same as my brother across three pieces of assessment, but notching a lower grade because not all assignments are created equal and marks out of 100 are not fungible. You see? Memoir.

I tried, having watched it on the big screen, to then read The Hobbit, but I failed. Much though the imaginative elements were there, the prose itself seemed laboured. It was like going back to Enid Blyton, only without any childhood nostalgia to sweeten the journey. I just couldn’t abide all the descriptive repetition; the sameness of Tolkien’s firkydoodling.

Thinking back to my English degree, I distinctly recall the feeling of reprieve I experienced upon discovering Tess of the d’Urbervilles as an audiobook. Rather than read it myself, I could listen to Martin Shaw, with whom I was familiar primarily through The Professionals, but also by way of a more serious snippet of period drama I’d happened upon one night while channel surfing. East Lynne, perhaps? “I should like to take a stroll on the moor.” Hand to hip; britches and jacket. Something like that.

Martin Shaw made Tess of the d’Urbervilles bearable, and so I was pleased to learn in my more recent time of need that he could also be heard reading The Hobbit. Not every dwarf cloak is described – the audiobook is slightly abridged – but Shaw weaves his sonorous spell for a good six hours, narrating, putting on a plethora of voices and generally matching the film trilogy’s epic sense of adventure. Dating from 1993, Shaw’s virtuoso rendition of Gollum must surely have informed Andy Serkis’ now-iconic performance across Peter Jackson’s magnum opus.

And so, at last, to The Battle of the Five Armies.

Tolkien, it seems to me (speaking of his corpus of works rather than the man himself), is one of those rare literary phenomena where the story being told comes in some measure to be associated, either positively or negatively, with the circumstances by which it is read, heard or viewed. Preconceptions; personal experience; prior encounters with Middle-earth: everything goes into the mix and the film, in this case, either weaves its spell or it doesn’t. Objectivity itself becomes subjective.

Which is my excuse for spurning even the pretence of critical analysis, and offering instead merely a conscious stream of likes and didn’t-likes. Or rather, a list of especial likes and didn’t-likes, which heavily favours the latter. As much as I enjoyed the movie overall, the best part was still picking it apart afterwards…

Starting with the good, we have Billy Connolly as Thorin Oakenshield’s second cousin, Dáin Ironfoot, whose injection into proceedings adds some much-needed charisma to all the fighting. Regardless of whether or not Connolly would have tallied with Tolkien’s conception of Dwarf royalty, this for me was the highlight.

Moving on to good that segues into bad, we have Martin Freeman. When it was first announced that Freeman would play the role of Bilbo Baggins, my reaction was the same as when he was cast as Arthur Dent; namely, “Yes. Perfect.” Freeman brings tremendous nuance to the screen. He’s one of those actors who can do a lot with little; who can say a lot while not quite saying anything at all. In the same way that Eric Idle’s Nudge Nudge, Wink Wink sketch looks somewhat underwhelming in written form but comes alive in performance, Martin Freeman can take ordinary (or even quite trite) lines and make them thoroughly convincing.

Freeman, in short (hey, accidental pun), has bravura to burn. The only problem is that he’s hardly ever on screen. Too many battles, not enough Bilbo! The same could be said of Sylvester McCoy as Radagast the Brown, but Freeman surely deserves more while playing the titular character. (Yes, I refer to the film by its subtitle, but all those armies aside, it’s still meant to be The Hobbit.) Peter Jackson in this respect has been perhaps too faithful to the book, going so far as to have Bilbo knocked unconscious and leaving everyone else to get on with it. Yes, that’s how Tolkien himself played it, but Tolkien also introduced Bard only minutes before Smaug was slain. Jackson saw no reason not to flesh out that character. Why then pay such little attention to poor old Bilbo? Presumably because…

…and here we move fully into the realm of bad points, The Battle of the Five Armies really is, by and large, just one big fight sequence. (And an excuse for Legolas to defy gravity; clearly he’s one of those elves who, if he found himself in a plummeting elevator, would jump up just before it hit the ground and so escape all harm.) There’s quite a bit of fighting in the book, too, but there’s also a lot of downtime, which Tolkien had the luxury of passing off in narrative voice. “They rested there for several weeks,” for instance, works better on the page than as a visual collage of dwarves sitting about the place, smoothing out their beards and generally recuperating. Peter Jackson omits such details and, cinematically speaking, this probably makes sense. The result is an uninterrupted narrative; but it’s one where time and space are outlandishly compressed. Everything happens all at once. Battles are fought. New armies appear. Middle-earth becomes somehow very small, as if you could take it all in just by standing atop the nearest hill. The whole scenario blossoms and dies like a sunflower in time-lapse.

And somewhere amongst it all, the hobbit aspect – the journey itself; Bilbo’s tookish adventure, reluctantly embraced and constantly at odds with his Baggins instincts – is lost, replaced by run-of-the-mill heroics and overplayed dramatic overtures.

There are two types of orc: some are near enough indestructible; others die if you brush past them too quickly and cause a draught. And remember what I said about Jackson being too faithful to the book? I take that back. Yes, Tolkien had orcs. They appeared towards the end and were fought against in a great battle. Jolly good. But Jackson has made his trilogy about orcs. They’re everywhere, growling and snarling and chasing and dying, just to add excitement (so-called) where film laboratory chemicals have eaten away all the subtlety. If Peter Jackson were filming the siege of Troy, he wouldn’t use a giant wooden horse. He’d have orcs. Multitudes of orcs, crawling over the screen like maggots on a dead hobbit.

But enough grumbling. Suffice it to say that my personal journey to Middle-earth was made in the company of two Martins, and that my enjoyment of The Battle of the Five Armies – for such it was, mostly – would have been enhanced had Peter Jackson opted for a more Shaw-footed or Freemannered, not so heavily orc-castrated, production.

Okay, well that’s just dire wordplay. I should rub that out. Replace it with CGI.