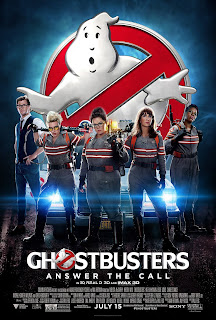 There’s déjà vu in the neighbourhood.

Ivan Reitman, speaking of the development of the original Ghostbusters film,[1] recalls Dan Aykroyd’s first treatment as featuring many groups of futuristic ghostbusters and about fifty large-scale monsters (of which the marshmallow man was just one), with an estimated production cost of (only half-jokingly) $300 million. This is not the movie that ended up being made in 1984; nor, sadly, is it the film that rebooted in 2016.


Ghostbusters: Answer the Call is by no means a bad production (objectively, it’s better than Ghostbusters II), but it’s the same as the original: neither reboot nor remake but rather a shadow; a “based on” in much the same way that Blues Brothers 2000 changed the details but followed exactly the same blueprint as The Blues Brothers. Not unlike covering a song that was near-perfect to begin with, the results of such mimicry can only be disappointing. It’s nobody’s fault. If not for nostalgia tipping the scales the lead cast (all women, all comedians) would near enough match up to that of the original movie. Likewise much of the dialogue, which is funny and well-delivered, just not as etched-in-stone memorable as those bon mots that have been quoted so often these last thirty-plus years. Chris Hemsworth differs from Rick Moranis in the quirkiness of his supporting role. Karan Soni brings something as the takeaway delivery man. But really, what else is there to talk about?


Yes, there are cameos, but these are mostly counterproductive. The bust of Harold Ramis brings home the sad truth that he’s no longer with us. Bill Murray’s appearance leaves us to question his refusal to be involved in countless other proposed Ghostbusters projects. Dan Aykroyd shows that he could easily still have answered the call. Ernie Hudson comes in late – still the token fourth member – while the less said about Sigourney Weaver’s effort the better. Only Moranis had the good sense not to return, which is how it should be. If continuity is to be thrown out (which after all is the liberty afforded by a reboot) then what value the cameo except to assuage the misgivings of old-time fans, yet in the process stirring their unfulfilled hunger for past glories? Even the brief snatch of Ray Parker Jnr’s classic Ghostbusters song isn’t so much paying homage as twisting the knife.


When the big scary evil comes to its flaccid end, Ghostbusters: Answer the Call is neither here nor there, nor anywhere else for that matter: not a shot-for-shot remake; not a sequel; and – let’s be honest – not really much of a reboot. By all means cast Melissa McCarthy, Kristen Wiig, Kate McKinnon and Leslie Jones. They’re very good, so why not? But pour some juice into the script! Cross the streams and go for something new, not merely: “Who you gonna call? Er, 1984.” Wake up, Hollywood: three decades later, the future is here; so why not go further into the future? Why not reboot from Dan Aykroyd’s at-the-time unrealisable first concept and have several competing ghostbusting groups and a threat that’s been in some way escalated, if only by inflation?


With a blank slate Ghostbusters: Answer the Call could have been anything. It could have been just as good as its classic forerunner, perhaps even (and here’s a thought the writers, producers and director seem not to have considered) better. Instead, we got more of the same: merely ripples of reprise. We got half-heartedly slimed. Again.