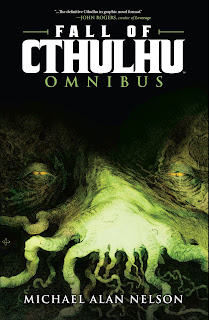 This huge book collects six trade paperbacks in one epic volume. The first five stories, from “The Fugue” through to “Apocalypse”, concern the plans of Nyarlathotep, the creeping chaos, who has taken human form and resurrected Abdul Alhazred to write a new chapter of the Necronomicon, a chapter concerning the fate of Cthulhu, who sleeps undying under the waves in R’lyeh. A saga that ends with gods clashing and the Dreamlands spilling their nightmares upon the earth begins in a more mundane setting, with Cy and his girlfriend Jordan at a cafe, where Cy’s uncle, Professor Walt McKinley of Miskatonic University, shows up, rambling about the blood on his hands before taking his own life, right there, al fresco. He leaves Cy a big bundle of mysteries and a knife ornamented with eyes that follow you around the room. It’s the start of a story that will take Cy to the traditional Lovecraftian edge of madness and a long way beyond. He will meet allies, like Sheriff Raymond Dirk, whose family have long tried to keep the craziness in Arkham from bubbling malevolently to the surface, and Luci Jenifer Inacio das Neves, or Lucifer for short, a teenage rascal with a pretty decent handle on what is going on. The three of them will encounter nightmares and gods, monsters of all kinds, most startlingly of all the Harlot, who summons unhappy men to the Dreamlands and gives them what they want, for a horrible price. A variety of artists take turns to portray this amazing colossal woman as we pass through the book’s six hundred pages, and each captures her horror in a differently spectacular way. The sixth section of the book is in part an ironic epilogue, but mostly a prequel, showing what went down (if you’ll forgive me) in Atlantis long ago. Overall, this is a good solid attempt at a Cthulhu mythos comic book, very much in the style of what you might expect from an official TV adaptation of Lovecraft’s work, rather than the glancing references and nods we so often get. The scenes in the Dreamlands are the high points, different artists and art styles used to render their strangeness. Cthulhu’s name is in the title, but this is about the Harlot and Nyarlathotep and the humans caught in the middle of their battle. You wouldn’t want to be in their shoes when R’lyeh starts to rise… ****
Posted by Stephen Theaker