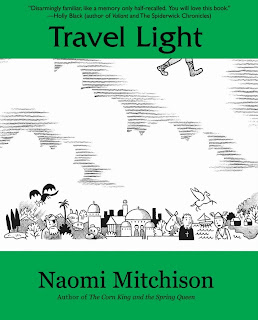 Little baby Halla has the misfortune to be a fairy tale princess, of the sort whose mother has passed away and father has remarried. The new queen wants her killed, but luckily the baby’s nurse Matulli is from Finmark, and has the unusual knack of being able to turn herself into a bear. This she does, and carries the baby away into “the deep dark woods where the rest of the bears were waking up from their winter sleep”. She lives with the bear cubs, learning to appreciate the taste of crunched mice, and the way the forest speaks in smells to the bears. She spends much of her later youth living with a friendly dragon, and comes to see the world from a dragon’s point of view, where maidens are thoughtfully offered for dinner, and heroes interfere with everyone’s best interests, and kings squander the gold that dragons sensibly gather together. When her stay with the dragon comes to an end, her voyage begins, taking her all the way to Constantinople to meet the Emperor. The book gets a little drier here, less whimsical, more political, and this, plus a certain amount of threatened and implied sexual violence, may explain why it did not become the famous children’s classic posited in the introduction. The way it approaches the hypocrisy of the established church is well done, but maybe not where readers might have hoped it would go after starting off with bears and dragons and a valkyrie. But it is still a very good book, one that plays clever games with defamiliarization, perception and time, and it lets its princess heroine decide for herself, a half century before Frozen and Princeless, whether her particular destiny was to marry or not. ****
Posted by Stephen Theaker