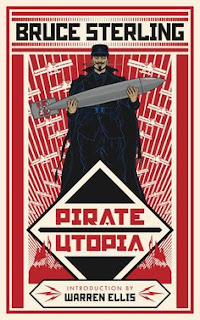 This novella tells an alternate history story based on the anarcho-syndicalist republic that was declared in the formerly Italian city of Fiume, a city where “there were more great world causes to fight about than there were men to represent them”, that was to become part of Yugoslavia after the first world war. In our reality the republic fell after fifteen months, but in this story a clever and capable engineer, Lorenzo Secondari, having been revived from death by a medical experimenter’s “psychically advanced séance”, arrives in the city in time to get its weapons factories up and running again. They had been taken over by female workers, including the formidable Frau Fifer, who becomes a companion of Secondari. As a result of his successes, Secondari rises to become “Minister of Vengeance Weapons”, the original title of Pirate Engineer being rejected as not quite right. Eventually Harry Houdini shows up, a secret ambassador from the United States, accompanied by Robert Howard and a surprisingly chipper H.P. Lovecraft. I really liked one bit of dialogue from Secondari, when he says, “I don’t have to believe any more, because it’s the truth!” I’ve often thought that when someone says they believe in a thing, that can be a sign that they don’t think it’s actually true (or at least isn’t true yet), whether they realise that or not. I enjoyed the book while finding it a bit hard to get to grips with, much like Michael Moorcock’s Jerry Cornelius and Oswald Bastable books. The book also contains an introduction by Warren Ellis, an interview with Bruce Sterling, a useful afterword by Christopher Brown, and a note by the cover artist, all of which, while interesting and often educational, does make you wish the story itself was a bit longer. ****
Posted by Stephen Theaker