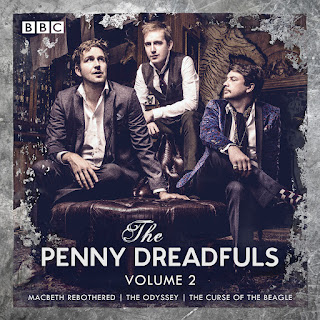 The Penny Dreadfuls are a comedy troupe – Humphrey Ker, David Reed and Thom Tuck – three chaps who retell classic tales in comedic fashion. The stories are scripted, rather than improvisational: Reed writes the plays, with additional material from Ker. This volume collects three of their productions, which originally appeared on Radio 4: Macbeth Rebothered (2014), The Odyssey (2015) and The Curse of the Beagle (2016). A typically appreciative Radio 4 audience is audible throughout, and adds to the atmosphere. Volume one was published concurrently, but, since it looked to be more focused on spoofing actual history, I went straight to the more obviously fantastical volume two. Margaret Cabourne-Smith appears in all three stories, performing most of the female roles, and getting many of the best lines. Susan Calman, Robert Webb, Greg McHugh and Lolly Adefope also take part.

Calman narrates the story of the Scottish play. They call it that as if it’s the only one, she observes, and at the end declares: “This has, without any doubt, been a tale, told by some idiots, full of sound and fury, signifying nothing, but at least it had some jokes in it.” They were good jokes too, but The Odyssey had the most and biggest laughs, for me, because Robert Webb’s foolish and vain Odysseus is such a funny character, who never fails to rush into trouble in search of spoils. Eventually he comes to a realisation: “I had always believed my actions to be good and honourable because I had followed my heart. Not once had I considered that my heart might be a bit of a bell-end.” In The Curse of the Beagle, a young Charles Darwin travels on the ship of that name, but there seems to be something supernatural going on, involving a hairy beast that uses its long gentleman’s part as a belt. If he doesn’t sort it out, he will fail his degree. It was a bit hard to relax into this one: it’s odd to hear comedy cannibals with funny voices in a modern day radio programme, even if it ends up undermining the old stereotypes.

Listeners who haven’t read the original texts won’t be lost, since the stories are kept quite intact and given room to be told properly – each audio play is about an hour long. Even where jokes are based on the quirks of the original texts (e.g. Odysseus having implausibly repetitive adventures), the plays quickly key listeners in so that everyone can get the next joke about the same thing. It should appeal to anyone who has been enjoying Upstart Crow as much as I have (which is quite a lot): the plays have a similar mixture of clever literary jokes and very silly ones, and they are also narratively very satisfying, with proper heartfelt moments. ****
Posted by Stephen Theaker