Pawn: A Chronicle of the Sibyl’s War, by Timothy Zahn (Tor) | review by Jacob Edwards 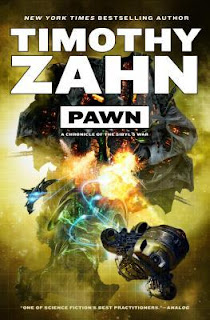 A chronicle of discontent.

This is not so much a review as a lament. Timothy Zahn used to be a favourite author of mine. I own many of his books. But in recent years I find myself borrowing, not buying (and even then I do so more from inertia than with the thrill of expectation). Perhaps the fault is mine, and my tastes have moved on. Or maybe Zahn has grown too comfortable in his niche.

Or could this be an opportunity to blame the publishing industry…? Actually, yes. Let’s do that.

Pawn touts itself as “a chronicle of the Sibyl’s War”; but in the modern SF parlance this doesn’t mean a complete chronicle. It means the first instalment of innumerably many in a story that once would have been told in a single book.

And with this I take issue.

Zahn in fact remains as imaginative as ever. His writing still bubbles along. But Pawn, just like so many films nowadays, isn’t really an experience in its own right. It is merely, solely, a prequel to whatever comes next. Zahn has envisaged an intriguing scenario but we learn about it only by way of breadcrumbs dropped along the path, and even then not very much. The novel in fact ends right where it should be beginning, and instead of the “A” plot (left scattered for future consumption) we are given a “B” plot that holds very little interest. Essentially, the entire book is clickbait.

On the first page of Pawn we meet Nicole, a somewhat abused low-ranking member of a Philadelphian street gang. By the end of the first chapter she has been abducted to an alien spaceship, and by the end of the book her gangland personality has more or less washed away, readying her for the SF chronicle to come.

To quote from the dust jacket: “Nicole soon discovers that many different factions are vying for control of the Fyrantha, and she and her friends are merely pawns in a game beyond their control. But she is tired of being used, and now Nicole is going to fight.”

Well, no. That is not what’s going to happen in Pawn. That’s what Nicole discovers by the end of it (sorry, the book’s own blurb is a spoiler) and what we might expect from the rest of the series. Looking back at Zahn’s Quadrail books, the template is clear: he has a single novel in mind and he’s going to spin it out across as many publications as his contract stipulates.

If Pawn’s “B” plot is anything to go by, there’ll be a lot of filler along the way.

Well, I’ve had enough. I’m not going to read any more. If the completed “Chronicle of the Sibyl’s War” is ever edited down into one book then I’ll take it up with glee. (The overarching idea really does appeal.) But until then, I’m out.

To push the obvious analogy: no longer will I allow myself to be a pawn of the publishing world.
Posted by Stephen Theaker