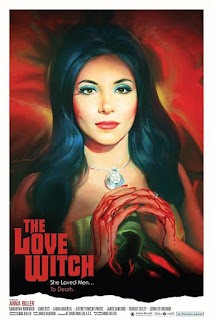 “I’m the love witch. I’m your ultimate fantasy!” Elaine Parks (played by Samantha Robinson) is a witch and a former burlesque dancer who comes to a new town, having left behind a poisoned husband. She has buried bodies before, she tells us, and she’ll do it again. She befriends Trish (Laura Waddell), and will later betray her. At the park she lays the whammy on Wayne (Jeffrey Parise), a louche professor. A love potion proves surprisingly successful, leaving him profoundly desperate for her. The strength of her powers is perhaps fuelled by her sublimated fury at the behaviour of men, including a scuzzy former mentor. Eventually her shenanigans will bring a police officer, Sergeant Griff Meadows (Gian Keys), into her life, as an investigator, and a lover.

Her professed submission to the desires of these men places them completely in her power. The message seems to be that what men think they want in a woman isn’t what they need: given everything they want they will lose their minds. Men are at best selfish buffoons, at worst dangerous brutes. Like children, they need boundaries. Women need to show solidarity with each other, and Elaine does not, which is what marks her as a villain.


Anna Biller writes the script and a song, directs, produces, edits, dresses the stunning sets, paints artwork, and makes the wonderful costumes. This is clearly the work of an auteur if there ever was one, and an auteur with a unique vision. It’s as stylish and as distinctively creepy in its way as a David Lynch film, but it feels authentic and sincere: it’s not a retro spoof like The Brady Bunch Movie (though that was brilliant too), and it’s easy to see why Biller has been rather put out by people calling it a parody or a comedy. It is absolutely not a film that’s so bad it’s good or anything like that. Viewers coming upon it unawares will honestly think it a product of another time till they see Trish using her mobile phone.


It’s heartbreaking to hear stories of Biller being treated badly by the crew, who for example she said crowded around the monitors for the (tastefully done) nude scenes. Hopefully the critical success of this film will give her more clout on set in future; one doubts the people who gave Ridley Scott a hard time on Blade Runner would get away with it now.


To a science fiction fan, this horror film was reminiscent of the original Star Trek series: intense, brightly-coloured, and deliciously ripe. A sequence set at a renaissance faire made this reviewer imagine her adaptating Jack Vance’s work (if she could find something of his with decent parts for women – a bit of gender-swapping might be necessary). She would do wonderful things with the stylized society of The Moon Moth, for example. But whatever she comes up with next will be worth a look. This movie is a true work of art. Stephen Theaker ****