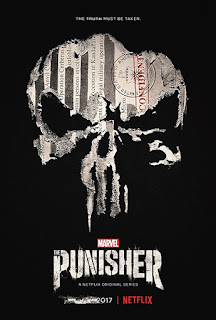 Jon Bernthal returns as The Punisher, Frank Castle, after being so good in the second season of Daredevil. That makes this that rarest of things, a non-fantasy spin-off from a fantasy show. (NCIS is another, being a spin-off of JAG which featured, at least in the episodes I saw, a psychic whose powers helped her solve crimes.) There are no resurrected ninjas in this one, no super-powers, just lots of violent people with lots of guns. The events of Daredevil left everyone thinking that Frank Castle was dead, and he’s pretty much finished wiping out the organised crime gangs involved in the gunfight that led to the death of his wife and family. However, a guy going by the name of Microchip (Ebon Moss-Bachrach), who is also pretending to be dead, has tracked him down, and wants help clearing his name, so that he can return to his own lost family. What’s more, Dinah Madani of Homeland Security (Amber Revah) has returned from Afghanistan with a mission of her own, to find who killed her partner, and that’s going to lead her into Frank’s sights. This is a very well made action programme. Bernthal, a serious actor, is given lots to chew on, and he conveys both Frank’s heart-rending pain over losing his family and his bottomless rage concerning everyone involved. When he’s upset, you believe it, and when he lashes out, it looks like it hurts. The action, whether it involves guns, knives or fists, is always well-staged, clear and exciting. There is a formula to these Marvel shows, with the airtime divided between the titular heroes, their allies and the villains, and Iron Fist showed how it could hurt the show if any of those are less than compelling. Here, all the story threads are compelling, and viewers are unlikely to feel that there hasn’t been plenty of Frank in the show. It’s really good. Stephen Theaker ****
Posted by Stephen Theaker