Theaker's Quarterly Fiction #66 is now out! 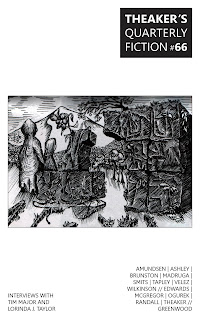 Howard Phillips returns to our pages with an editorial, where he lists the 2019 writings of his that he hopes you will consider for awards recognition this year.

At the moment the issue is just available as a free download. We will add links to the Kindle and paperback versions as they go live on Amazon, which for obvious reasons will take a little bit longer than usual.


Here are the tremendous contributors to this issue.

Amber Velez has been published in Carnegiea Literary Magazine and won a Young Authors award at the 2019 Tucson Festival of Books. She originally wrote to us from Spain, where she was alternately schlepping through hostels or working on farms, on a gap year before she went to MIT. Her story in this issue is called "Eresh Ashore".

Charles Wilkinson contributes "Evening at the Aubergine Café" to this issue. His publications include The Pain Tree and Other Stories (London Magazine Editions, 2000), A Twist in the Eye (Egaeus Press, 2016) and Splendid in Ash (Egaeus Press, 2018). A full-length collection of his poetry came out from Eyewear in 2019 and Eibonvale Press will publish his chapbook of weird stories, The January Estate, in 2020. His stories have appeared in Best Short Stories 1990 (Heinemann), Best English Short Stories 2 (W.W. Norton, USA), Best British Short Stories 2015 (Salt), Confingo, London Magazine and in genre magazines/anthologies such as Black Static, The Dark Lane Anthology, Supernatural Tales, Theaker’s Quarterly Fiction, Phantom Drift, Bourbon Penn, Shadows & Tall Trees, Nightscript and Best Weird Fiction 2015 (Undertow Books). He lives in Wales. More information can be found at www.charleswilkinsonauthor.com, his website.

Douglas J. Ogurek is the pseudonym for a writer living somewhere on Earth. Though banned on Mars, his fiction appears in more than fifty Earth publications. Douglas’s website can be found at www.douglasjogurek.weebly.com and his Twitter account is at www.twitter.com/unsplatter. To this issue he supplies reviews of Joker, Jumanji: The Next Level and Maleficent: Mistress of Evil.

Drew Tapley’s work has appeared in all three of our Unsplatterpunk! specials, and also in the Chiron Review, Popshot Magazine and others. His story in this issue is "Space Cutlery". One of our favourite things: something utterly ridiculous played absolutely straight.

Elaine Vilar Madruga is a poet, fiction writer, and playwright, born in Havana, Cuba in 1989. Her work has appeared in numerous literary journals and anthologies around the globe. She has authored more than thirty books, including Culto de acoplamiento (2015), Sakura (2016), Fragmentos de la tierra rota (2017), El Hambre y la Bestia (2018), and Los años del silencio (2019). Translations of her short stories have appeared in venues such as The Bitter Oleander, The Café Irreal, Fantasy & Science Fiction and Mithila Review. Her story in this issue is "A Star Is Born", translated by the prolific Toshiya Kamei.

Howard Phillips contributes this issue's editorial, "For Your Consideration". He is a frequent contributor to Theaker’s Quarterly Fiction, and also to its predecessor fanzine in the nineties, New Words. His novels include His Nerves Extruded, The Doom That Came to Sea Base Delta and The Day the Moon Wept Blood. Sequels We Slept Through the Apocalypse and A Dim Star Is Born remain sadly unfinished.

Jacob Edwards reviews "Terminator: Dark Fate" for us this time. He also writes 42-word reviews for Derelict Space Sheep. His website is at www.jacobedwards.id.au, his Facebook page at www.facebook.com/JacobEdwardsWriter, and his Twitter account is at www.twitter.com/ToastyVogon.

Jessy Randall interviews Lorinda J. Taylor in this issue. Her essay on the language of the Battlestar Galactica reboot appeared in the February 2018 issue of Theaker’s. Her poems, stories and other things have appeared in Asimov’s, Lady Churchill’s Rosebud Wristlet, McSweeney’s and Strange Horizons. She is a librarian at Colorado College and her website is http://bit.ly/JessyRandall.

John Greenwood is the co-editor of TQF and provides the cover art for this issue.

Mae Ashley is a former resident of seven states scattered around the U.S. and currently lives in Washington, D.C. Her fiction has appeared in The Charleston Anvil and her earlier work appeared in the types of journals that feature Greek symbols and diagrams. Her story in this issue is "A Grandmother Paradox".

Matthew Amundsen's story in this issue is "Swallowing the Sun". When not writing, he is a sound engineer in Minneapolis, where he lives with his daughter. Since his previous story was published in TQF64, another appeared in Metaphorosis. Other stories have appeared in Cemetery Moon, Jersey Devil Press, Millennium SF&F and Starsong.

Rafe McGregor lectures at Edge Hill University. He is the author of two monographs, two novels, six collections of short fiction, and two hundred articles, essays, and reviews. His most recent work of fiction is The Adventures of Roderick Langham, a collection of occult detective stories. In this issue he reviews three Lone Wolf books, Star Wars: The Rise of Skywalker and season four of The Man in the High Castle.

Stephen Theaker is the co-editor of TQF and shares his home with three slightly smaller Theakers. In this issue he reviews four audiobooks, seventeen books, ten comics, one album and four television programmes. His reviews, interviews and articles have also appeared in Interzone, Black Static, Prism, Dark Horizons and the BFS Journal.

Teika Marija Smits writes poetry, fiction and non-fiction, and has been published in Mslexia, Reckoning, Shoreline of Infinity and Best of British Science Fiction 2018. She is the founder and manager of the small press Mother’s Milk Books, and in spare moments she likes to create art. Website: https://marijasmits.wordpress.com. Twitter: www.twitter.com/MarijaSmits. Her story in this issue is the satirical "The Red Choos".

Walt Brunston’s adaptation of the classic television story, Space University Trent: Hyperparasite, is now available on Kindle. To this issue he contributes the latest instalment of The Two Husbands: "The Emperor of Pseudo City".


As ever, all back issues of Theaker's Quarterly Fiction are available for free download.
Posted by Stephen Theaker