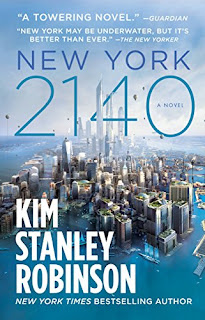 One hundred and twenty years from now, New York City is quite different: 300-storey superstructures dwarf today’s high-rises, massive balloons hold up “skyvillages”, and most notably, water surrounds the city (a result of the “second pulse” during which sea levels throughout the world rose). Thus, those who don’t fly get around in watercraft. And yet, in many ways, New York (and the rest of the world) are much the same… particularly when it comes to the conniving, self-interested political and financial elite.

New York 2140 by Kim Stanley Robinson is a leviathan of a novel woven together by fragments – it’s no coincidence that Moby Dick and its author repeatedly surface. The story offers an exhaustive look at the potential economic and environmental outcomes of humankind’s planetary exploitation. Its home base is the Metropolitan Life Insurance Company Tower (aka “the Met”), now surrounded by water and home to many people. Among the characters who weave in and out of the Met are a young financial whiz/playboy, the building’s overseer, the building’s head of maintenance, a beautiful young woman who flies around the world in a blimp while doing a reality show and helping animals, two homeless boys and an old man seeking treasure, and two “quants” (quantitative analysts) named Mutt and Jeff who’ve discovered some shady dealings among their organization’s leadership.

Not surprisingly, the most digestible parts of this novel are those written in scene. The reader gets a feel for what like is life in the new “super-Venice”. One highlight is the self-centred, though not entirely flawed 34-year-old hedge fund manager Franklin Garr pursuing women and navigating his speedy watercraft around the city. Another compelling scene involves the two boys, Roberto and Stefan, diving to find gold supposedly hidden beneath the Bronx. Then there is Amelia Black, the reality show star with a penchant for shedding her clothes, attempting to relocate an aurora of polar bears to Antarctica. Hint: things don’t go as planned.

However, long passages of exposition – the author even comments on this – are inserted throughout the book. During these lectures, some more stimulating than others, a narrator (portrayed in my audiobook version as a staunch New Yorker) reflects on the story, history, climate, politics and especially finances.

Robinson seems to be using the novel as a platform to introduce ideas about how to put power and financial freedom into ordinary people’s hands. Particularly interesting is what Robinson has to say about dealing with the next inevitable financial collapse… timely considering today’s coronavirus-driven unemployment concerns. Perhaps today’s political and financial leaders could learn something from Robinson, but they’d probably be bored.—Douglas J. Ogurek ***
Posted by Douglas J. Ogurek