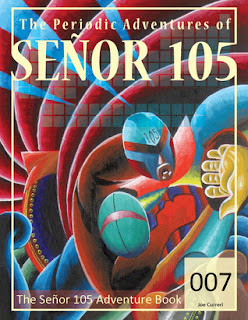 Señor 105 is a Mexican wrestler and an international man of mystery, whose various elemental masks grant him special powers. He is also reputedly a botanist, a scientist, a stuntman, a magician and an escape artist. His colleagues are a sentient balloon named Sheila and Officer Lori Flaherty of the Canadian Mounted Police. He is distantly related to the Doctor Who franchise, having I think originated in stories about Iris Wyldthyme (imagine a cross between Mrs Cornelius and River Song; she may well have partly inspired the latter), a creation of Paul Magrs who appeared in several fine Doctor Who novels. This book was part of an ebook-only series, the Periodical Adventures of Señor 105, and is still available from the Obverse Books website.

It is a book of two halves. The first is described with a wink as Stories for Her and is entitled “Ciao, Fantastique!” For the most part this takes the point of view of Officer Flaherty, who gets involved with Fantastique, a Diabolik-style thief in a white rubber costume, whose uncles are trapped in a painting. The Stories for Him half of the book is from the point of view of a villain, who is very fond of the frogmen he sends out to pillage. He tells us about his disastrous encounters with Señor 105 and his allies. These are “The Iguana Diaries”.

It’s worth acknowledging that a few years have passed since the book was first sent in for review, and the goal posts have moved: one could imagine the book being eviscerated today by reviewers who would have lauded its diversity a few years ago. But I enjoyed it very much. What I love about the Señor 105 stories (and similar titles from Obverse Books, Manleigh Books being their ebook imprint) is their immense sense of fun, their high spirits, their anything goes energy, and that’s all abundant in this book too. The answer to what happens next is always the same: whatever would be most interesting. Stephen Theaker ***