Sherlock Holmes and the Beast of the Stapletons, by James Lovegrove | review by Rafe McGregor 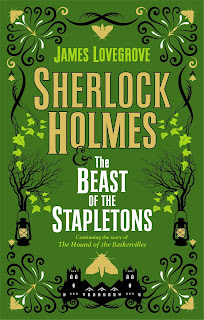 Sherlock Holmes and the Beast of the Stapletons by James Lovegrove

Conan Doyle’s The Hound of the Baskervilles was serialised in The Strand Magazine from August 1901 to April 1902 and then published as a novel (or, more accurately, a novella) by George Newnes the following month. The tale is probably the best known of all the Sherlock Holmes stories and is certainly one of the most filmed, with big and small screen adaptations stretching from 1914 to 2016 at the time of writing, including retellings in both BBC One’s Sherlock (2010-2017) and CBS’s Elementary (2012–2019) series (The Hounds of Baskerville in 2012 and Hounded in 2016 respectively). I think it may also be the narrative about which I have written the most, in terms of number of publications: a review of one of the sequels, David Stuart Davies’ The Tangled Skein (1995) in TQF24 (2008); an article for Crime and Detective Stories (2008) in which I propose an alternative solution to the case; a review of SelfMadeHero’s graphic novel in TQF29 (2009); a chapter in Josef Steiff’s Sherlock Holmes and Philosophy (2011) in which I suggest that the novella is primarily a work of horror rather than crime; and a short story sequel, “The Wrong Doctor”, first published in TQF50 (2015) and reprinted in Sherlock Holmes Mystery Magazine 20 (2016) and The Adventures of Roderick Langham (2017). The reason for my fascination – or perhaps I should say fixation – is my interest in crossover between crime and horror fiction (particularly, but not exclusively, the occult detective) and my agreement with Christopher Frayling’s claim that The Hound is one of the four great Gothic horror stories of the first century of the genre, alongside Mary Shelley’s Frankenstein; Or, The Modern Prometheus (1818), Robert Louis Stevenson’s Strange Case of Dr Jekyll and Mr Hyde (1886), and Bram Stoker’s Dracula (1897). In the chapter for Sherlock Holmes and Philosophy I examined both the creative context of the novella, which was originally intended to be a supernatural story co-authored with Bertram Fletcher Robinson, and the narrative itself to show that the mystery plot is underpinned by tropes much more common to the horror genre.

If my fascination is a fixation, I am at least not alone in my neurosis. My alternative solution (which made the case for Dr Mortimer as the mastermind behind the conspiracy) followed Arthur Robinson’s “Justice Deferred: Deaths on Dartmoor” (2006), also in Crime and Detective Stories, which identifies Henry Baskerville himself as the villain, and Pierre Bayard’s Sherlock Holmes was Wrong: Reopening the Case of The Hound of the Baskervilles (2007), in which Beryl Stapleton takes centre stage.  Until reading James Lovegrove’s novel, which is advertised as ‘Continuing the story of The Hound of the Baskervilles’ on the cover, I had read three sequels: Michael Hardwick’s The Revenge of the Hound (1987), Davies’ The Tangled Skein, and a short story I have been unable to track down since. Though I enjoyed The Tangled Skein when I first read it, in retrospect none of the three comes close to doing justice to Doyle’s original.  If anyone can, Lovegrove seems to be the author to do it. He has been publishing novels since 1990, has written for children, young adults (as Jay Emory), and adults, has a military science fiction series called The Pantheon, and currently writes for the Firefly franchise. He is also the foremost writer of Sherlockian pastiche, publishing three separate sets of novels in imitation of Doyle: six titles in Titan’s The New Adventures of Sherlock Holmes series; The Cthulhu Casebooks Trilogy, the first of which I reviewed for TQF here; and two standalone novels, Sherlock Holmes and Christmas Demon (2019) and Sherlock Holmes and the Beast of the Stapletons – all since 2013.

The Hound was published after Doyle had terminated Holmes’ career and life (albeit half-heartedly, with no corpse) in “The Final Problem”, which was published in the Strand in 1894 and explicitly dated to 1891. The Hound was not intended to be Holmes’ resurrection – that would come in “The Adventure of the Empty House”, published in the Strand in October 1903 – and, as such, is one of the cases undertaken by Holmes and Watson prior to the detective’s apparently fatal clash with Professor Moriarty. The dating is somewhat vague, prompting much speculation among Holmes enthusiasts, and my own choice is autumn 1888. Lovegrove has selected the equally convincing autumn 1889 and begins his novel with a foreword by Watson that addresses precisely this question and is itself dated to 1903. The foreword, as well as Lovegrove’s occasional discussions of Sherlockian lore – solving, for example, the mystery of Watson’s disappearing dog in A Study in Scarlet (1887) – will endear him to the audience to which he has dedicated his novel, ‘HOLMESIANS AND SHERLOCKIANS EVERYWHERE’. What might not endear him to that audience is his representation of Watson, who is more petty and more timid than Doyle’s original and, maybe more importantly for contemporary readers, than either Martin Freeman or Lucy Liu’s Watsons. This is a personal preference and, in consequence, a minor criticism, but I favour pastiche that recognises Watson’s own extraordinary qualities. He is, after all, something of a polymath – a doctor, a soldier, a detective, and a bestselling author.

Let me state at the outset that Beast of the Stapletons is by far the best of the three sequels to The Hound that I have read (I exclude my own from the comparison, of course). My main – and only substantial – problem with the novel is its structure, to which I must draw attention before proceeding to its content. The novel is composed of three parts of six, sixteen, and eighteen titled chapters respectively (for a total of forty). Part I begins with an incident that establishes the personality of Lovegrove’s Watson, is followed by four chapters in which Benjamin Grier, Baskerville’s friend, consults Holmes, and ends with a detailed recap of the first case. I understand the need for the recap, but it constitutes an entire chapter and, combined with the preceding four chapters of exposition, facilitates a reading experience in which we are told rather than shown the sequence of events. This experience extends to Part II, the whole of which is a summary by Watson of Holmes’ recounting of the week he spent on Dartmoor while Watson remained in London. Lovegrove’s play of similarity and difference to and from the original is inspired, but his reversal of the Holmes–Watson dynamic in The Hound (in which it is Holmes who – ostensibly – remains in London) detracts from the suspense of the narrative. As readers, we immediately know that whatever may have transpired during that week, Holmes has escaped entirely unscathed. Part III employs a more engaging style of storytelling, involving a more active and adventurous Watson, but Lovegrove applies the brakes as soon as the pace picks up: Chapters 26 to 29 are all set aboard a Transatlantic steamer as Holmes, Watson, and three accomplices pursue the villain, who has been revealed in Chapter 25. It is very difficult not to read these chapters as, at best, a distraction and, at worst, a delay in the narrative that has no parallel in the original.

The premise of Beast of the Stapletons is straightforward but intriguing: history is repeating itself in Dartmoor, with the victim being Baskerville’s wife rather than uncle and the murder weapon a huge Calyptra moth rather than a giant black dog. The appearance of the vampiric moth seems to implicate Stapleton, the villain of the original, who was an entomologist by inclination and whose body was never discovered. Whether the moth (if it exists at all) is Stapleton’s ghost or a corporeal servant he has spent the last five years breeding, is (like the true nature of the hound in The Hound) all part of the mystery, but given that Doyle never involved Holmes in the occult, it is fairly obvious that Stapleton has not returned from the dead (which is not to say that he has not returned at all). Lovegrove revisits the pleasures of the original by setting up a similar pool of suspects: Mortimer, Frankland, Laura Lyons – and of course Grier and Stapleton (if he survived). As soon as this pool is established, however, it is drained almost as quickly as Grimpen More, which is being emptied by an enterprising Grier in search of Stapleton’s skeleton. One of Holmes’ suspects commits suicide by the same method used to murder Audrey Baskerville and conveniently leaves the solution to the puzzle of the moth in a cupboard (readers familiar with Stoker’s unfinished The Lair of the White Worm will have anticipated this particular dénouement). Case closed, or so it seems until Holmes concludes his recitation with: “There is something about it that I cannot put my finger on. I feel that I am missing something obvious, something so glaring that by rights I should have seen it long ago.” Three days later Baskerville’s son, Harry, is kidnapped and one of his servants, Mrs Barrymore, poisoned. Once the perpetrator of the crimes is identified, the novel changes form from a murder mystery to a crime thriller, with the thrills coming courtesy of the dual attempts to rescue the child and apprehend the suspect – or, suspects. Once the sea voyage is over, the action rises quickly and there is a tense climax consisting of a spectacular variation on a Mexican standoff. The novel concludes with a deathbed confession that imbues retrospective meaning into the narrative and foregrounds the depth of Lovegrove’s engagement with the original and with the Sherlock Holmes canon as a whole.

While avoiding spoilers, I am compelled to commend the author for noticing two features about both the canon and The Hound. The former is concerned with Doyle’s recycling of certain names and certain syllables within those names. This was probably unconscious on his part as he did not keep any kind of database or even detailed notes on the stories, in which there are numerous inconsistencies (the most famous of which is probably the location of Watson’s war wound). The latter is concerned with the physical similarity between one of the canon’s villains and a character in The Hound. I cannot say any more, but as far as I know, Lovegrove and I are the only ones to have both identified these phenomena and put them to use in fiction. As his novel will have a much greater readership than my short story, I look forward to the idea reaching a wider audience and maybe even being used in future pastiches and adaptations. Lovegrove has nonetheless made an error in Beast of the Stapletons, albeit a forgivable one: he appears to have forgotten that Dr Mortimer had a wife. The following is by Holmes from Chapter 6 of The Hound: “There is our friend Dr Mortimer, whom I believe to be entirely honest, and there is his wife, of whom we know nothing.” The mysterious wife is only mentioned once more in the novella (by Mortimer) and never seen at all or, strangely, considered to have played any part in the case whatsoever. My suspicion is that Doyle himself forgot about Mrs Mortimer – he wrote very quickly and used very few drafts – and was not the last author to forget the details of his own plot (Raymond Chandler’s comments on the murder of the chauffeur in his 1939 novel, The Big Sleep, spring to mind).

In closing, the compilation of a history of my own engagement with The Hound inspired by Lovegrove’s striking sequel reminded me that I’ve now been reviewing for TQF for twelve years…which is two years longer than I’ve ever committed to any job, though not quite as long as my marriage… long may they both continue.