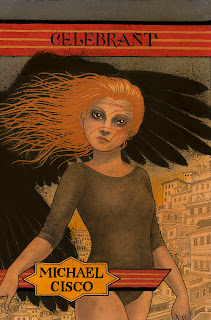 Celebrant, Michael Cisco (Chômu Press, pb, 340pp). Although he isn’t quite sure why, deKlend is on a pilgrimage to the fantastical city of Votu, where time works in odd ways, remembering can be fatal, and books are read from east to west, not right to left. The irony is (or at least it seems to be – this isn’t a novel that gives the reader much firm ground to stand on) that he is there already, and he refuses to believe anyone who says so. At least his reluctance to accept it gives him time to work on the magical sword brewing in his lungs, and gives us time to get to know the city and its inhabitants. The book alternates, more or less, between deKlend’s story, thoughts and streams of consciousness, and encyclopaedia entries about this thought-to-be imaginary city (which sometimes end in incoherence themselves) and snapshots of the lives of those who live there.

The usual purpose of pilgrims to Votu is to worship the five natural robots, who are believed to have formed through “a very unlikely succession of complications in the process of stalagmite formation”, and have the oddest sex this side of Samuel Delany’s latest, all drills and grinding and exchanges of components. Two packs of feral children roam Votu: rabbit-girls with long teeth and hinged backs, and black-eyed pigeon-girls who cluster on rooftops. (Depictions of sexuality among these groups may make some readers uncomfortable.) Other chapters introduce us to Phryne, a lead addict whose only escape from plombotic side-effects lies in soaking up the emanations of incestuous sex, and Adrian Slunj, deKlend’s would-be adversary, an author and cult leader who doesn’t open his teeth when speaking. (So of course it is great fun to read his dialogue out loud, teeth clenched.) By the end most stories have connected, often in unexpected ways.

At least that’s how I interpreted what I read, what I managed to take in and remember. Pitfalls await the reviewer of Celebrant who is too sure of their ground. One passage late in the book has fun with the idea of reducing its events to a simple summary: “if you look on the back cover of this book, you won’t see anything like ‘so-and-so discovered another world and now he is no longer so sure which one is real dot dot dot’”. One might say the book features this or that character doing something or other, only to have missed a key word or phrase revealing that character to be a phantasm or a joke or a thought experiment or their actions to be a dream or a hallucination. It is a book where almost every sentence – and in some passages every word – is rich with information, and for at least the first hundred pages or so readers may have to accept that they can’t possibly take it all in.

The key to reading the book comes, perhaps, when Phryne tells deKlend that he is already in Votu, and he thinks, “there’s no point trying to make them understand you mean the real place, the actual physical spot. They’re just lost in metaphors.” Readers could treat the book as a metaphor, or as an exercise in surrealism, but it might be more rewarding to treat it as an attempt to describe literally the complicated and confusing nature of existence in Votu. The writing isn’t obfuscatory or knotted; grammatically, each sentence is perfectly clear (except where, like certain bits of Godot, they are deliberately not); it’s the unusual experiences and thoughts they describe that are difficult to apprehend. It’s a book that will reward second readings; pages that baffled first time around were easier to follow after finishing the book. (Well, except for the chapter where the police burst in on a family of pillows…)

Those reading Celebrant for pleasure, free of the reviewer’s unsympathetic need to arrange it in logical patterns that can be summarised and communicated, are likely to enjoy it even more than I did, and I liked it very much. Better a book that overwhelms with the quantity and complexity of its ideas than a book that has none at all. It is challenging, but readers should approach the book with confidence that it does, in the end, come together in a kind of sense. Many will appreciate the echoes of Borges’ magnificent “Tlön, Uqbar, Orbis Tertius” in its early pages; imagine Borges collaborating with, say, James Joyce to expand upon that story: this is a chance for adventurous readers to read a full novel along those lines, and it’s a chance they should definitely take.
Posted by Stephen Theaker