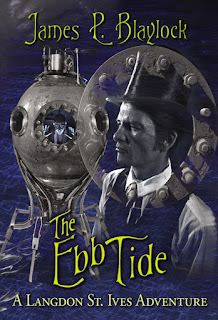 The Ebb Tide by James P. Blaylock (Subterranean Press, ebook, 1093ll, originally published in 2009) is (or was, when first published) a new adventure for Langdon St. Ives and his friends, taking place, as the not entirely reliable afterword explains, seven years after the events of the novel Homunculus, on 6 May 1822. It begins with an urgent delivery to the Half Toad Inn in London, which unfortunately precludes the consumption of a delicious meal. The result: “there wasn’t a man among us who didn’t have the look of a greedy dog”! One feels for them, but the latest edition of Merton’s Catalogue of Antiquities demands their immediate attention. Its listings include a tatty hand-drawn map showing roughly where the wagon of an ally sank beneath Morecambe Sands. The race is on to recover a treasure that went down with their chum, but less savoury types are also in the hunt, led by Ignacio Narbondo – also known as Frosticos!

Though there’s a touch of amusing postmodernism to the afterword, in which Blaylock confesses that his stories have been plagiarised from manuscripts looted from a steamer trunk found in a sexton’s garden shed, the novella tells its story in a literal, functional mode (the result of “the increasing sobriety of age”, the afterword explains) that presents certain dangers. I read The Ebb Tide twice, and both times missed, due to sleepiness, an important section explaining that a diving chamber commandeered by the heroes had mechanical legs, rendering later passages (e.g. “we risked breaking our legs if we ventured onto dry land”) thoroughly bamboozling. (I felt very silly after realising that the diving chamber and its legs are shown on the book’s cover.) It’s a dry, understated style, that might not appeal to everyone, but tickles me very nicely when I’m in the right mood (and so long as I’m wide awake).

Similarly, while this isn’t a book that will be enjoyed by readers looking for angst-ridden tales of twisted anti-heroes, I very much appreciated the bracing sense of cameraderie among the friends involved in the adventure: Langdon St. Ives, Tubby Frobisher, the narrator Jack Owlesby; even Finn Conrad, the new lad who joins them on the adventure, and Merton, the antiquities man (“he does a brisk trade with sailors”) who takes a nasty knock to the head while saving the map from a pair of toughs. It’s a convivial book where the heroes are happily married, they fondly hope to eat a good roast dinner when the escapade is concluded, and the narrator’s guiltiest secret is that he has had the bad form to distrust a new friend.

The James Blaylock books I’ve loved best in the past have been the fairytale fantasies like The Disappearing Dwarf, but unsurprisingly his steampunk works are attracting much more attention at the moment. This novella doesn’t display the kind of greatly transformed nineteenth century that readers might tend to associate with steampunk now. Instead, it is to that time as The X-Files is to ours, revealing a secret, mysterious world of which the general populace is completely unaware or deeply sceptical: a ring of floating cows, for example, or the exciting discovery made by St. Ives and Owlesby under Morecambe Sands. Nevertheless, Blaylock’s books are currently being republished in the UK with the rubric “Steampunk Legend” affixed to his name, and I doubt new readers will be disappointed; one hopes this brings him a degree of well-deserved commercial success.
Posted by Stephen Theaker