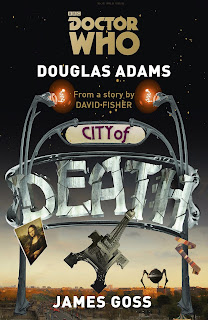 The gamble with time – playing the odds of authorship.

Douglas Adams’ involvement with Doctor Who is… complicated. For many years the three scripts he wrote were lamented as being very good (City of Death), very bad (The Pirate Planet), very good and bad in a Schrödinger’s cat kind of way (the unfinished, unbroadcast Shada), and in all cases very much and quite pointedly so, unnovelised. Adams did write a fourth script, which was novelised, but that was Doctor Who and the Krikkitmen, which upon being rejected by the Doctor Who production team eventually lost the Doctor and regenerated into Adams’ third Hitchhiker’s novel, Life, the Universe and Everything. In a similar vein, City of Death and Shada weren’t entirely unnovelised: significant portions of them found their way into Dirk Gently’s Holistic Detective Agency. But these caveats aside, of all the authors whose stories could have disappeared into the time void, it was Adams alone (okay, and two of Eric Saward’s scripts; not such a great loss) whose Who output was destined not to line the bookshelves of fans most eager to devour it. Adams wouldn’t accept the pittance being offered by Target Books; nor, especially after he’d cherry-picked from them himself, would he allow his scripts to be novelised by someone else. End of story.

Well, not quite. A decade after Douglas Adams’ tragically premature death, his estate relented and gave permission for Gareth Roberts to work on Shada. The resulting novel, which is quite brilliantly executed, is probably the only fleck of silver in the dark cloud of Adams’ passing. It also paved the way for two more posthumous collaborations, with Roberts’ next assignment being City of Death. Which he now hasn’t written. Instead, the cover credits Douglas Adams and James Goss, from a story by David Fisher. Complicated? Just a little.

Upon broadcast, City of Death was ascribed to David Agnew, which was a BBC pseudonym used to cover up the similarly trifold mixed parentage of Adams, producer Graham Williams and the aforementioned David Fisher, who was unavailable when money was scrounged to film abroad and his original script (The Gamble With Time) needed a last-minute reworking to accommodate a location shoot in Paris. Adams, who as script editor was at least partly responsible for letting this potential crisis reach the eleventh hour, consequently was locked up over the course of a weekend and, with Williams now script-editing, rattled off City of Death. The resulting story, compared to, say, the analogously last-minute So Long, and Thanks for All the Fish, was a triumph. David Fisher’s script provided the perfect framework for Adamsishness at its most piquant, to which was added the splendour of Paris, a certain bonhomie of performance by Tom Baker, Lalla Ward and guest stars, and also an ITV strike that ipso facto sent the BBC viewing figures skywards. From rather troubled beginnings, City of Death thus became officially (and in many eyes unofficially) the most popular Doctor Who story of the original series. Now, fast forward thirty-five years or so and—

Enter, James Goss, who, true to the spirit of the original penning (albeit perhaps lacking the panache to pull it off) was drafted in to write the novel when Gareth Roberts proved suddenly and unexpectedly unavailable. Notwithstanding the task still awaiting whomever is ordained worthy of bringing The Pirate Planet from screen to page, surely this must go down as the toughest if potentially most rewarding enterprise ever gifted a Who novelist. And the result? Well, it’s complicated…

Shada tells the story of Scaroth, last of the Jagaroth, who fell splintered through time when his spaceship exploded back at the dawn of Earth’s history, and has been working ever since to advance humanity to the point of civilisation whereby Count Scarlioni, the last of his personas, can invent a time machine and travel back to prevent himself from initiating the calamity in the first place. To fund his experiments, Scarlioni is planning to steal the Mona Lisa and then sell off the multiple copies he’s arranged an earlier fragment of himself to commission from Leonardo Da Vinci. The only people standing in his way are the Doctor and Romana, who have come to Paris for a holiday, and Duggan, a pugilistic detective whose fist-happy approach provides both a semi-satirical contrast to the Doctor’s methods and an unerring source of humorous material. Punches and bon mots abound. Unfortunately, in the novel, so does the unconscionable shrapnel of typographical mishap. The book, simply put, hasn’t been proofread, which is something of a recurring issue in the BBC range but exacerbated in this instance by the hasty composition. It’s a terrible shame for a glossy hardcover bearing Douglas Adams’ name. As to the writing itself…

James Goss starts with a chapter of jumbled vignettes, which ostensibly lend backstory to all the characters (however minor) who appear in the televised version of City of Death, but which serve also the purpose of obfuscating the reader’s connection to the original. This isn’t a bad idea — let the novel stand for itself, Goss says, not merely call to mind memories of what most readers will already have seen — yet he then presents a narrative that does, particularly in its descriptive elements, rely on that prior knowledge. For example: Douglas Adams contrived for John Cleese and Eleanor Bron to make a cameo appearance in the art gallery scene towards the end of episode four. This was loved by some viewers, criticised by others, but in either case was something of a throwaway. For Goss to have seeded this cameo with several other Cleese/Bron showings earlier in the novel is pointless at best and at worst tripping the light nonsensical for anyone approaching the book as a self-contained entity. Other characters are fleshed out more purposefully, adding at least to the overall mood, if not strictly speaking to the story itself, but the approach is patchy. Goss does afford more substance to the Doctor and Romana than is evident on screen, but even here, where the veneer of flippancy is peeled back to reveal more serious layers beneath, the effect is spoiled somewhat by an unkempt narrative glibness that comes and goes but overall seems hell-bent on crafting a Hitchhiker’s pastiche. This is something Gareth Roberts efficaciously avoided in Shada, whereas in City of Death the stylistic aping is not only evident but also unnervingly off-kilter; if Adams’ narrative voice were to have been evoked, the darker, more measured timbre of Dirk Gently would surely have been a better choice.

James Goss has obviously approached his task with diligence and enthusiasm, taking pains not only to bring the televised story to life but also to ascertain those of Adams’ intentions that didn’t make the transition from script to screen, and to work these into the finished product. Thus, for instance, Scarlioni’s gratuitous end-of-episode reveal as Scaroth is explained at last, as to some extent is the conjugal oddity by which the Countess Scarlioni has never quite noticed that her husband is (in every sense, but especially physically, albeit behind a mask) not human. Other inconsistencies remain the unexplored purview of dramatic licence; and perhaps rightly so, for to probe them more deeply would achieve nothing more than to detract from a tale fizzing with exuberance. Goss has had to strike a balance between presenting City of Death “as is” and remodelling it as something that more intricately wasn’t; between showing due reverence to the spirit of Douglas Adams and due respect to the need to look beyond him. Aforesaid misgivings aside, he’s managed the feat quite well; and although the James Goss novelisation might sit as third-placed iteration on the multiverse podium, below the gold and silver of those by Adams and Roberts, nevertheless it is a book worth slotting into what otherwise would remain just a wistfully set-aside space on the shelf. Jacob Edwards
Posted by Stephen Theaker