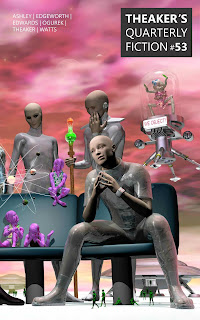 You have waited so long for this, but now the wait is over!

We’re sorry again that it is so late, but here it is at last! Possibly the only publication in the world in which you can read positive reviews of not one but two of Adam Sandler’s recent films.

Allen Ashley works as a writer, poet, editor, critical reader, event host and writing tutor. He runs five creative writing groups in north London including the advanced group Clockhouse London Writers. His most recent books are as editor of Sensorama: Stories of the Senses (Eibonvale Press) and Creeping Crawlers (Shadow Publishing). He contributes a short story, “Rathfern’s Menagerie”, to this issue.

Douglas J. Ogurek’s work has appeared in the BFS Journal, The Literary Review, Morpheus Tales, Gone Lawn, and several anthologies. He lives in a Chicago suburb with the woman whose husband he is and their pit bull Phlegmpus Bilesnot. Douglas’s website can be found at: http://www.douglasjogurek.weebly.com. In this issue he reviews The Gallows and Pixels.

Howard Watts is a writer, artist and composer living in Seaford who also provides both a story, “Dodge Sidestep’s (and Martin’s) Final Dastardly Plan”, and the cover art for this issue. His artwork can be seen in its native resolution on his deviantart page: http://hswatts.deviantart.com. His novel The Master of Clouds is now available on Kindle.

Jacob Edwards also writes 42-word reviews for Derelict Space Sheep. This writer, poet and recovering lexiphanicist’s website is at http://www.jacobedwards.id.au. He also has a Facebook page at http://www.facebook.com/JacobEdwardsWriter, where he posts poems and the occasional oddity. Like him and follow him! In this issue he reviews Doctor Who: City of Death and Terminator Genisys.