The Flash, Season 1, by Andrew Kreisberg and many others (Warner Bros Television) | review 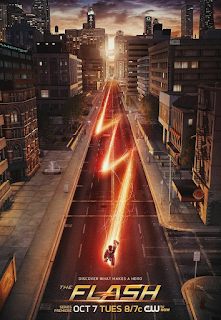 The Flash is a name that has been used by a series of DC Comics characters: Jay Garrick in the forties, Barry Allen from the late fifties, Wally West from the late eighties, and probably a couple more since. The Flash of this television series is Barry Allen, a police scientist who is struck by lightning and becomes the fastest man alive. Before that happened Barry appeared in episodes of Arrow, and so, like the forthcoming Legends of Tomorrow and Vixen animated series this is part of what’s sometimes called the Arrowverse. Gotham probably isn’t a part of this continuity, nor was Smallville, nor are any of the planned DC films, but Supergirl is in a nearby dimension, and Constantine was added after-the-fact once he had appeared in Arrow. That’s quite the little universe that has grown out of Arrow, a show with such unpromising beginnings. The Flash gets off to a much better start than its big brother. The big change from the comics (or at least the comics I’ve read) is that the lightning storm is brought on by an explosion at STAR Labs, after Harrison Wells turns on his particle accelerator against the advice of his colleagues. This explosion acts much like the meteor crash in Smallville, providing an origin for most of the superpowered beings we meet in the programme. (One whose powers don’t come from there is Captain Cold, played brilliantly by Wentworth Miller in several episodes.) Wells, along with high-flying assistants Cisco Ramon (Carlos Valdes) and Caitlin Snow (Danielle Panabaker), helps Barry to master his powers, as step by step he becomes the Flash we know and love. Grant Gustin is likeable as Barry Allen, determined to clear his father for the murder of his mother (he saw red and yellow blurs flashing around her in the room that night...), and in love with journalist Iris West, daughter of the police officer who became his guardian once dad was in jail. There is so much to like about the show: its confident handling of story arcs and mysteries, its excellent special effects, the speed with which it builds up a roster of great supporting characters, the diversity of its cast and characters, and how it draws on all the riches of the character’s history. This is Barry Allen, but there’s a lot of the Wally West stories in here too: fingers crossed for Chunk in season two! For those who have read Flashpoint, the risk that this Barry might create that dark universe looms over the season’s events. The main villain is properly scary, with his glowing red eyes and readiness to kill. I could live with less mooning over Iris in season two, but the programme originates on The CW so that rather goes with the territory. Stephen Theaker ****
Posted by Stephen Theaker